Economists and market pundits have often stated that any kind of stimulus package is going to help people who are without work, without a job and help them have health insurance.

What Is A Stimulus Package?

The phrase Stimulus Package is believed to have been possibly derived from the word “stimulate”, which literally means to raise the level of any activity.

In economics, stimulus package is a package of economic measures undertaken by policymakers that helps stimulate the overall economy to eventually save the country from a financial crisis. The asserted objective of a stimulus package is to revive the economy and prevent or rather reverse a recession by boosting employment and spending.

Economists believe that the concept of stimulus package is based on principles outlined by Keynesian economics. This economic theory, developed during the 1930s to understand the Great Depression, argues that the impact of a recession can be reduced with enhanced government spending. Likewise, the idea behind a stimulus package is to offer tax rebates, enhance money supply and boost spending.

Here is an interesting fact: In more colloquial terms, economic stimulus is also referred to as “pump-priming” or “priming the pump.”

Who Provides Stimulus Package And Why?

Stimulus package is ideally provided by the Government and Central Bank. In times of economic turmoil, individuals and businesses are heavily dependent on the policymakers to launch incentives that can boost economy.

Stimulus packages are launched to ensure the safety of bank deposits, safeguard stability of the financial system, infuse liquidity into the banking system and eventually counter the impact of economic downturns or recession and “stimulate” the economy.

Why Is Stimulus Package Significant?

Stimulus Packages are fundamentally important to any economy as they help heal phases of economic depression. They are the go-to means used as a preventive or reversing measure to stop a recession.

Stimulus package comprises of a combination of fiscal and monerary incentives that aim to boost spending. As spending increases aggregate demand, there is an increase in employment rate which sequentially increases income and hence boosts economic growth. The cycle continues until the economy recovers from collapse.

Besides ensuring stability of the banking and financial system, problems faced by non-banking financing companies are also addressed through stimulus packages.

ALSO READ: Is stimulus package really beneficial, or is it just delaying the inevitable?

How Does Stimulus Package Work?

The economic measures are means to take advantage of the impactful multiplier effects. They also ultimately increase consumption in the private sector, while encouraging investment spending. 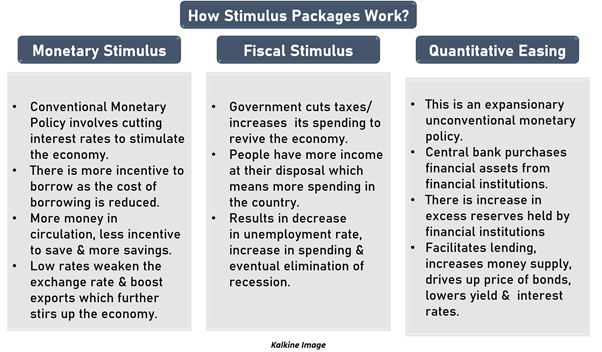 What Is The Impact Of Stimulus Package?

Are There Risks Associated To Economic Stimulus?

To enact the various measures of a stimulus package, the Government may invite a significant debt burden. This is a risk, as high government debt levels may lead to an increase in bankruptcy risk for the government. It should be noted that the probability of this risk in a large, stable economy is low, but for smaller, unstable countries, it can be a severe concern.

Some economists opine that economic stimulus may even delay or prevent private sector recovery from the actual cause of a recession. For instance, rising demand for labour will increase wages but upset business profit.

Besides, consumer behaviour cannot be predicted always. Some may choose to spend less if they believe that they would pay higher future taxes to cover government deficits.

GOOD READ: Is Cash Crunch Fear A Reality As We Battle Coronavirus?

Another risk of stimulus package is an instance wherein it aims to boost the industries of sectors that are hardest hit by the recession, which may not aid overall recovery.

What are Some of the Historical Examples Of Stimulus Packages?

3 times billions got wiped off crypto markets in 2022