What is meant by factor endowment?

Abundance of resources may also help nations in achieving relative competitiveness and specialise in one good. Factor endowment is also sometimes referred to as factors of production. Both are similar; however, the term ‘endowment’ only refers to the quantity of the factors of production available with a nation.

How does a nation benefit from factor endowment?

Nations that are abundant in goods can benefit from them as they are inputs in the manufacturing of goods and services. With the availability of factor inputs, countries do not have to depend on imports to carry out production. 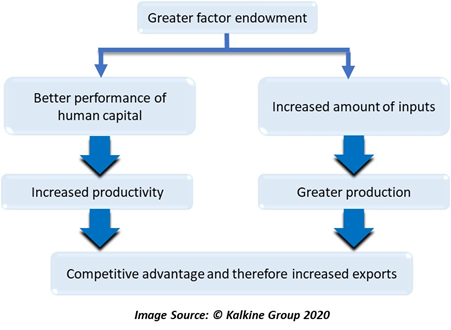 Also, countries that have land, labour and capital are more likely to see a better performance of human capital as well. Nations that are not wealthy are less likely to have proper educational institutions, healthcare services and the correct tools to aid the human capital. Therefore, factor endowments open many other channels that help in production.

Overall, this makes a country competitive and more self-sufficient rather than import dependent. It also enables the country to export to other nations at competitive levels.

What is the factor endowment theory?

This is called comparative advantage. As countries enjoy efficient production in one good, they can export it and they can simultaneously import the good in which they are inefficient.

Factor endowment ratios are prone to change. As countries advance it might be possible that countries gain advantage in goods that they were previously not advantaged in.

What is meant by factor endowment?

What are the problems with factor endowment theory?

Factor endowment theory only accounts for a small percentage of the world trade. For instance, consider the case of the United States and East Asia. Many East Asian countries are labour abundant, but they started growing at a much faster rate than the US. However, it was observed that as both started to become more like each other in terms of the availability of factors, trade grew between them. This is contradictory to the factor endowment theory.

This points to the fact that there are other factors influencing the trade between them rather than the availability of resources. Thus, factor endowment theory fails to apply to the practical world. It also does not account for the technological differences between two countries. Therefore, it is not the absolute basis of trade for countries. 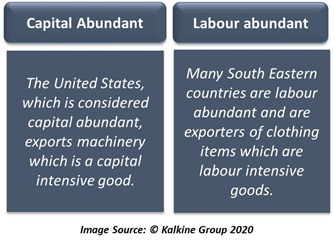 However, the factor endowment theory is still applicable in some instances. For instance, countries that are abundant in labour like Bangladesh and India are high exporters of manufactured clothing, which is a labour intensive good. Similarly, Middle Eastern countries are abundant in oil and thus are major exporters of it. The US is considered as a capital abundant nation and thus it is efficient in the production of machinery and sees high exports of the same.

Here’s why Arafura (ASX:ARU) shares are gaining on ASX today