Who is the Chief Executive Officer?

A CEO is the first person in command of a company. The person is the highest-ranking individual in the company. He/she facilitates the communication related to core operations with the Board of Directors.

CEO is the face of the company and is elected by a vote of shareholders and support of the Board. He/she is also responsible for top-level decision making, which may yield success or destruction. It is the CEO and management team who take the blame for destruction as well as an appreciation for success.

CEOs are often associated with other titles as well such Managing Director, Chairman, President. He/she is the top boss in a company and reports to the Board of Directors. When CEOs also hold a substantial stake in the company, like founding CEOs, they can supersede Board at times through the voting system and even oust the members of Board.

The CEO is one of the Key Management Personnel (KMP), which could include CEOs of different regions in the company, more in the case of MNCs (Multi National Companies), Chief Financial Officer, Chief Technological Officer, Chief Marketing Officer. Remuneration paid to KMPs is reported in the Annual Reports of the companies.

What are the roles and responsibility of a CEO?

Power comes with responsibilities. There is a lot on the shoulders of the top brass, which is headed by the CEO. We shall now underline the roles and responsibilities of the first person in command of a company.

Strategy: As a head of the organisation, the CEO helps to formulate key strategies for the business for long-term as well as short-term. The person may not be extensively involved in the formulation because of a possible dedicated team for strategy development, but the person will certainly oversee and have a say in the process, taking microeconomic and macroeconomic indicators in into consideration.

Manager of managers: The person is also responsible for managing the managers, who are leading various teams such as production, marketing and sales, administration, public relation etc. A CEO is a person who oversees the implementation of strategies by various managers in the organisation.

Delegation of authority: It is important for the CEO to delegate team members with authority for flawless decision-making in the organisation. When subordinates of the CEO have the authority to undertake decisions, the results are often encouraging because of reduced time in executing decisions and achieving results.

Human capital: It is important for an organisation that the employees impart the values, behaviour, and attitude developed by the management teams. A robust human capital is favourable for a business, and developing human capital along with changes in the business environment becomes imperative for a successful organisation.

What are the traits of a successful CEO? 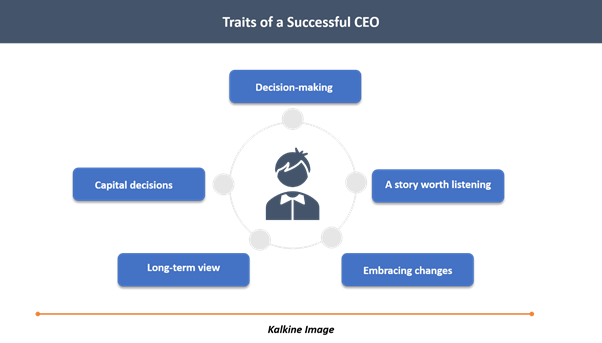 Decision-making: Effective and timely decision-making could be the factor that would make a difference. A manager should take decisions and respond to the problem in a time-bound manner since delaying decisions can cause more damage. Underestimating the problems and delaying the response are not the traits of a successful CEO.

Consider a firm has been facing competition from a new product in the market. A proactive CEO will likely launch a similar product to protect market share rather waiting for market share to erode over time.

A story worth listening: When strangled in a crisis, an efficient boss will likely develop a strategy with the help of the team. Although cutting costs is perhaps the first thing for CEOs, it may give a better financial performance in the short run.

However, long-term performance improvement would not be propelled by lowering costs. The strategy developed by the management should be worth listening for investors and stakeholders. The successful CEOs not only tell a crowd-pleasing story but implement and achieve results from the strategy.

Embracing changes: Business environment continues to change rapidly, and it is crucial for the organisations to cope with the changes. Implementing changes in the organisation may also require onboarding of new individuals to drive the change, while incumbents could be made to leave.

Long-term view: Although the short-term view is important to solve any problem, the managers who consider the second-order, third-order or nth order consequences of the decision reflect their long term approach.

Capital decisions: Capital decisions of firms shall not only include financial capital but human capital as well. Managing capital efficiently and running the business on sustainable leverage is crucial for a successful organisation.

It is also important that the managers review past capital decisions and learn from past mistakes. Repeating the same mistake again is not a good trait of managers while avoiding past mistakes is certainly a favourable trait. The Fund managers gauge a CEO’s performance quantitively by looking at ROE metrics over years.

What is DeFi? Can it coexist with the traditional banking system?