What is Comparative Advantage?

The international trade theory of Comparative Advantage indicates the competence of a nation to produce a good or service at a lower opportunity cost compared to other trading agents. The comparative advantage looks at a relative cost of production rather than the overall monetary cost for the product.

The concept of comparative advantage majorly arises because a trading partner on the back of its competence in factors of production such as infrastructure, location, climate, labour skills, etc. holds an edge over the others during a trade. It shows the overall gains from the international transaction compared to an autarkic situation by identifying the opportunity cost.

Significantly, the choice between trading a good or producing the same has remained as a critical question for the economies. The doubt enquiring which trading agent should produce the product and which should export often assumes a centre stage for macroeconomic decisions. The simple answer to the dilemma would be that an economy which can produce a particular product at the lowest cost should involve in production. At the same time, other nations can import the product.

The concept of Absolute advantage is very much the same, which asserts that economies should involve in the trade of goods which they can produce at the lowest cost. However, what if out of the two nations, one holds an absolute advantage over both the products? Although Absolute Advantage theory in such case would discourage bilateral trade, the concept of comparative advantage indicates that how both economies mutually profit in such situations from trade.

The economies possess a finite amount of resources, which can be employed to produce goods and services. The choice to create a particular good is accompanied by the sacrifice of options to make other goods and services using the same resources. The next best possible alternative which is foregone when opting for a production of a particular product or service is called Opportunity Cost for that product or service.

Production possibility frontier is used to understand the concept of Opportunity cost. The graph indicates the possible combinations of Good X and Good Y that can be produced in an economy at a given time. 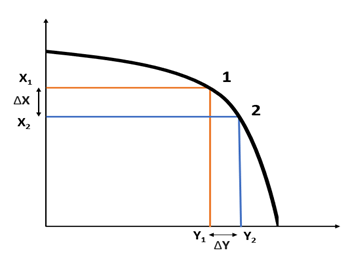 The decision to produce a particular product and import the other is made by taking into consideration the opportunity cost. The product in which the Opportunity cost of a product is comparatively higher is generally forfeited.

Understanding How Opportunity Cost is Beneficial to Both Trading Economies

Let us look at the case where two economies, say Germany and France are considering the trade of two products, A and B.

The table below indicates the number of products that are produced per resource input (here labour hours). 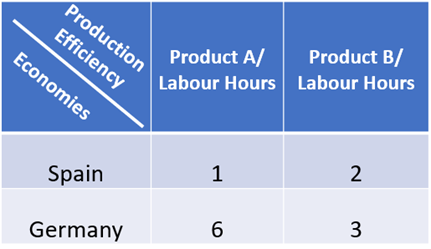 Looking at the production efficiency of Spain and Germany for both the products, it is clear that Germany holds an absolute advantage for both. In contrast, Spain is at Absolute Disadvantage in either case.

Thus, for mutually beneficial trade, as indicated by David Ricardo’s theory, the commodity in which Spain has a lower comparative disadvantage is ascertained. It is done by the concept of Opportunity cost.

How Germany gets Benefitted from Trade

How Spain Gets Benefitted from Trade

The earlier Theory by Adam Smith postulated that a beneficial bilateral trade is only possible when each of the two countries involved in a trade deal possesses an absolute advantage in one of the commodities. However, David Ricardo asserted that valuable trade between two economies is possible even if one of the countries is at an absolute advantage for both the entities.

David Ricardo’s theory implies that despite a nation not able to produce either of the two commodities more efficiently than the second nation would benefit from international trade.

The opportunity cost of products for nations is compared to make production and trade decisions. In the case of comparative advantage, the economy produces that product where it has a lower opportunity cost than its trading partner.

Limitations of the Comparative Advantage Theory

The Comparative Advantage Theory is based on a specific set of consideration while it does address varying real-world scenarios, which altogether limits the scope of the theory. These include:

Assumption of a Simple Model

The Comparative Advantage Theory postulated by David Ricardo considers a simple model involving a trade of two products between two countries. However, the actual system is much more complex as a range of products and services are produced. Furthermore, the globalised trade scenario involves a web involving exchange of services and products across different nations.

An ideal market situation is assumed in theory for Comparative Advantage. Thus, the market is supposed to be perfectly competitive without the presence of any market imperfectness. Today’s international trade scenario involves nations striving to promote their domestic producers to ensure trade surplus. However, in theory, no such barrier to entry is considered.

Transportation and other Expenditures during Trade

The cost consideration for the product does not take into account supporting costs such as transportation and other related expenditures that are involved in the shipment of a product. Thus, the whole picture of profits attained is not visible through the comparative advantage theory.

SEK to WHS: Take a look at these 5 dividend-paying consumer stocks

How #SpendTheBits' merchant portal is building a Bitcoin payments infrastructure?

How #SpendTheBits' merchant portal is building a Bitcoin payments infrastructure?