What are the Factors of Production?

Classification of Factors of production 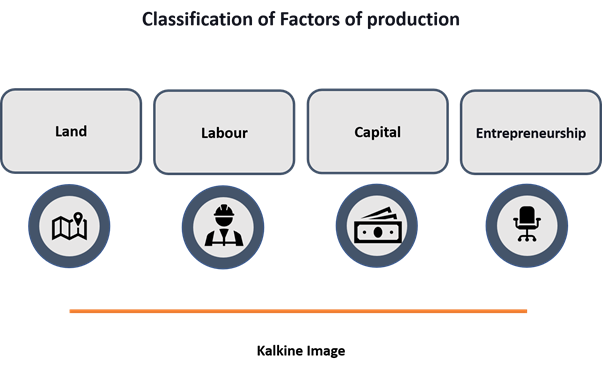 Land includes all the natural resources available such as water and air. It constitutes a natural resource that yields income and is exchangeable for a consideration. In the absence of land, water and sun, a farmer cannot produce crops.

Every commodity traded in the world can be traced back to land directly or indirectly. Such as gold is extracted from mines, crude oil is explored and extracted from oil fields, grains are produced in agricultural land. Moreover, the land is arguably the ultimate origination of commodities.

Meanwhile, the quantity and quality of land are vital to yield an acceptable utility for the user. But the availability of land does not guarantee economic growth because the ability to use resource determines the optimal use of the resource.

Land can be further classified as renewable and non-renewable. Renewable resources can be used again and again in the production like an agricultural land used year after year for the cultivation of food, grains etc.

Non-renewable land is not usable again and again and is exhausted as the consumption increases. A gold mine may not yield additional income for a business when ore reserves are exhausted. And a new discovery would provide additional resource.

Land, as a blessing of nature, is fixed in supply. Whether the demand increases or decreases, the supply of land will remain the same. As a result, it is not dependent on the price, therefore supply of land is perfectly inelastic.

Labour does include not only physical but also mental abilities that are done by humans for a monetary benefit. The contribution of labour depends on the size and quality of labour.

For instance, Japan has been successful in the production of small and compact cars, while the US producers were efficient in slightly heavy cars.

Higher productivity of labour will likely deliver favourable benefits. As a human factor, labour cannot be exchanged for value, unlike land and capital. Labour is used with land and capital and cannot be separated.

Labour is available in return of wages and is not a saleable commodity. While one cannot store labour for future use, the supply of labour is dependent on the need for production. Labour supply is elastic, and it takes time to develop overall supply.

Division of labour emphasises on the speciality of labour in a particular work. Every labour group in an organisation is further classified into various divisions, depending on the quality, skills, knowledge and demand.

Capital is a critical factor of production and largely means wealth, which includes stock of raw material, machinery, tools, building etc. It is also the money available for productive and investment purposes.

Capital also extends to physical assets such as machinery, raw material that are directly used in the production. Securities such as shares and bonds are not classified because they are not used in production, thus not the factor of production.

It is largely classified into fixed capital and working capital. Fixed capital is used in the production continuously and incur wear and tear. Fixed capital does not mean it is immovable, but the essence of fixed is the cost incurred, which largely remains fixed over the period of production.

The cost incurred in working capital is, however, recovered when the product is sold. Such as the cost of raw material, along with other inputs, is a component of the total cost of the good. Capital also includes human capital.

Human capital is also a vital unit of production and means the education, skills, and health of people. It is essential for the improvement in productivity. It is now understood that investments in human capital provide favourable growth.

Entrepreneurship is vital to confluence the factors of production and manages risk & uncertainty associated with the production. Now it is understood that production is a function of land, labour, capital, and entrepreneurship.

Entrepreneurship is more concerned with the incorporation of production, rather business affairs, which are managed by other people working on wages. Therefore, an entrepreneur takes the risk and uncertainty associated with production.

An entrepreneur is responsible for initiating a business enterprise and is engaged in assembling the factors of production, including land, labour, capital and entrepreneurship. Innovation and development are also associated with entrepreneurship.

Elon Musk is an entrepreneur aspiring to reach mars, produce e-vehicles, launch space travel. He is effectively managing and bringing about the factor of production to achieve results.

What are the key forces powering Saunders International’s growth?

Have These 7 Stocks Gained Maximum Volume On NZX?

5 Investing Ideas from Investment Company Stocks for This Month

Net Zero Emissions: How UK Companies Are Trying to Achieve the SDGs