What is Depression in Economics?

In economics, depression is referred to as a more severe form of the global recession, reflecting a prolonged and major downswing in economic activity. Depression is commonly characterised by widespread unemployment, sharply down industrial production, significant falls or pauses of growth in construction activity, and massive cutbacks in international trade and capital transfers.

The Reserve Bank of Australia (RBA) defines depression as a broader version of recession, both in terms of duration and scale. As per the Central Bank, the scale and duration of depression imply that there are usually adverse economic outcomes that are experienced in several countries across the world.

Unlike any minor business contractions that usually occur in a single country independent of economic cycles in other countries, depressions have generally been worldwide in scope. Consequently, some definitions of depression state it as a terrible recession that stems in one or more economies.

What is the Difference Between Recession and Depression?

The 33rd US President, Harry S. Truman gave a very famous quip - “It’s a recession when your neighbor loses his job; it’s a depression when you lose your own.”

On the flip side, the depression is described by a period during which major macroeconomic indicators such as employment level, stock market values and business activity plummet severely or stay at a very low level for a sustained period. In other words, depression is more destructive than a recession, with its effects lasting for decades, as witnessed in the 1930s Great depression.

In addition, the recession is a more localized scenario, while depressions generally have a global reach. Some economists also define depression as a period of output decline for over two years, a fall in output of 10 per cent or larger and a peak in the unemployment rate to about 20 per cent.

Don’t Miss: Bells ringing around a Technical Recession for Economies across the Globe

How Can We Trace Back the Origin of the Great Depression of 1930s?

Fortunately, the world witnessed only one economic depression in modern times, which was the ‘Great Depression of 1930s’ that lasted from 1929 to around 1939.

While the Great Depression sprouted in the United States (US), it caused dramatic falls in output, acute deflation and severe unemployment in almost every country of the globe. Recalled as the worst economic slump in the history of the US and the industrialized world, the event induced around 30 per cent fall in the real GDP and over 24 per cent surge in the unemployment rate of the US.

The severity of this depression became more apparent when it was compared with the US’ next worst recession – the 2008 Global Financial Crisis – during which the nation’s GDP fell by 4.3 per cent, while unemployment rate peaked below 10 per cent.

The economic depression of 1930s also delivered a heavy blow to the Australian economy, with its GDP tumbling by about 10 per cent and the unemployment rate peaking to around 30 per cent in 1932.  However, the RBA believes that Australia was less impacted by the Great Depression than some other economies in terms of social and economic consequences.

What were the Key Causes of the 1930s Great Depression?

There is no single event that triggers economic depression, while it is an outcome of a multitude of factors, ranging from stock market crashes to deflation. To gain a better understanding, take a look at five key reasons that sowed the seeds of the Great Depression of 1930s: 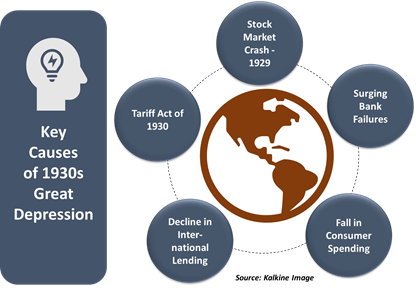 In addition to these factors, the drought that arose in the Mississippi Valley during 1930 – the Dust Bowl - is also believed to be a contributing cause of the economic depression.

What are the Warning Signs of an Economic Depression?

Evidence shows that economic depression exhibits several warning signs over sustained period prior to its arrival! With that said, let us quickly discuss some major threat signs of a looming depression:

What are Feasible Responses to an Economic Depression?

SSE, CAN, DRX: Stocks to eye as energy bills may go down with £10 bn aid