What is meant by deflation?

Deflation generally indicates a highly productive economy but decreasing prices could also point towards a contraction of demand. Deflation can also lead to a financial crisis as the prices could crash down to unforeseen levels.

To some degree, deflation helps in increasing consumer spending, and it allows domestic consumers to purchase a higher quantity of products for the same price as before. On the contrary, deflation can sometimes be a sign of an impending recession. The speculation of an incoming recession may urge consumers to save more today, which can lead to a further contraction in demand.

What are the causes of deflation?

Two macroeconomic factors can cause deflation:

Deflation is the economic state where the money supply in the economy remains the same, but the population and the economy both expand. Therefore, to maintain equilibrium, the amount of cash in an individual’s portfolio decreases. This leads to an overall increase in the value of the currency, unlike in inflation.

Deflation is the scarcity of hard cash in an economy which makes it more valuable to hold.

The scenario of deflation can also occur when the productive efficiency of a nation increases due to better technology. Higher competitiveness levels also lead to firms lowering their prices as they save up on their costs. As prices are lowered, consumers are left with more cash in their portfolio, and thus deflation occurs.

What are the economic impacts of deflation?

Deflation can lead to the following macroeconomic impacts: 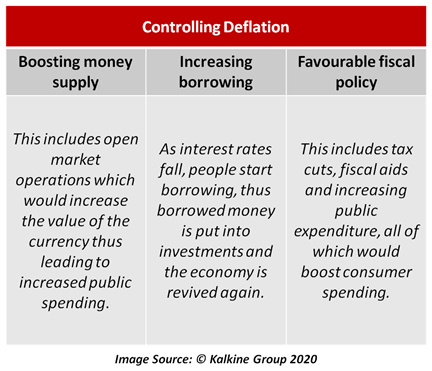 Is deflation more harmful than inflation?

Inflation leads to an overall increase in the price levels, and thus goods become more expensive, and the value of the domestic currency falls. However, inflation may be beneficial in some cases as it helps reduce the burden of international debt. As the domestic currency loses its value, the foreign debt on a country also declines in real terms.

Unlike inflation, it is hard for consumers to protect themselves from deflation. People can invest and save enough money to ensure that they can combat the scenario of inflation. However, deflation poses a set of challenges for the consumers which are hard to get by and can be explosive at times. It can also put the economy under a liquidity trap, wherein people hoard money instead of investing it.

How can deflation be controlled?

Deflation can be controlled by the government using the following methods:

Is deflation overall a good economic scenario for a country?

Deflation can be more harmful than beneficial for an economy. If a country finds itself locked into a deflationary spiral, it becomes challenging to come out of it. Moreover, increased debt levels caused by deflation are hard to recover from, even with proper debt financing measures taken by the government. Financing debt, in the current period, may lead to increased debt burden in the future.

However, lower level of prices in an economy can also have positive connotations. It can be a sign of an efficient production set up in the economy facilitated by proper utilisation of resources. Economies that offer relatively cheaper goods are deemed to be highly competitive. An example is the computer hardware markets across the world. As new and fast production techniques become accessible across the globe, the price of the final output becomes lower internationally. Thus, there is deflation in the computer hardware markets.

How Australia's big four banks are preparing ahead of anticipated rate hikes?

When was the last housing market crash in Australia?

Which stocks perform better in high inflation - Value or Growth?

How does inflation affect interest rates?

ASX 200 falls for a second session this week