Inflation is perhaps one of the worst blows for any economy. For time immemorial, economists have regarded inflation to cause economic catastrophe, devaluing everything and everyone. ‘As violent as a mugger’, ‘as frightening as an armed robber’ and ‘as deadly as a hit man’- is how the 40th President of the US, Ronald Reagan describes inflation.

On the flip side, Austrian economist Ludwig von Mises considers inflation to be a ‘policy’- ‘not an act of God’, ‘not a catastrophe of the elements’, not a ‘disease that comes like the plague’! Clearly, though high rate of inflation is an immediate economic trigger, a little dose of inflation seems absolutely essential.

Simply put, inflation refers to the rise in the prices of most goods and services of daily or common use- such as food, clothing, transport, housing etc. From an economic perspective, inflation refers to the long-term uptick in the prices of goods and services, and thus in turn leads to the devaluation of currency and decrease in the purchasing power of an economy’s currency.

Breaking it down further- inflation is a quantitative measure of the rate at which the average price level of goods and services in an economy increases over a period of time. It, therefore, denotes the rise in the general level of prices, where a unit of currency effectively buys less relative to prior periods.

Inflation Is Not Always Bad!

An optimum level of inflation is required to encourage outlay as against saving, and in the process aid in economic growth. In a healthy economy, prices usually inch up. This is not good for a consumer, nonetheless, reasonable price rise is a indication of a healthy, budding economy.

What Are the Types/ Causes Of Inflation? 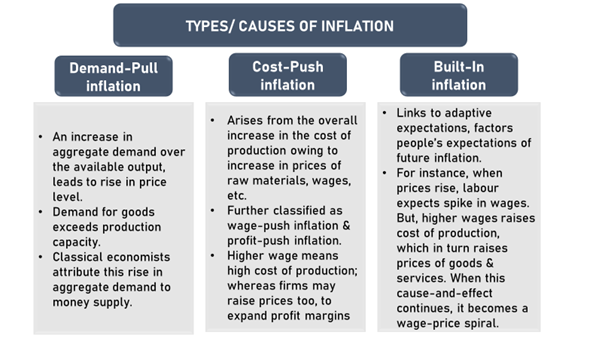 It is widely acknowledged belief that the nature of inflation is not uniform in an economy all the time. Consequently, it is classified beyond these key types. Let us cast an eye on few other types of inflation-

Extremely low inflation demonstrates that demand for goods and services is lower than it should be. This tends to slow economic growth and depress wages and can lead to an recession with increase in unemployment. A classic example of this is what the world witnessed over a decade ago- the Great Recession of 2007-2009, that created the largest economic upheaval in the United States since the Great Depression of the 1930s.

Experts regard high inflation as a ‘destructive force’. If inflation becomes too high, and persists, it can have a rather dramatic effect on the econometric-social structure of an economy. High inflation, one could say- harms everyone, not just because of increased costs and increased unemployment but also due to the time lag before one gets a cost of living increase.

High inflation also encourages people to spend money before it loses its value, so they tend to buy things they don’t need-as a method of preserving value. Subsequently, people may go into debt and fail to save.

How Is Inflation Measured?

Inflation is measured in percentage, by a government authority. The inflation rate is, therefore, the percentage increase or decrease in prices during a specified period and explains how quickly prices rose during the period. 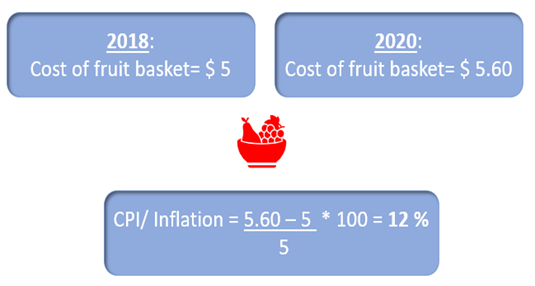 Measuring inflation is deemed vital as it is believed to be a key economic indicator that helps to determine an average citizen's financial health. Further, central banks use this data to formulate their policy rates.

What Are Adverse Effects Of Inflation?

Read: RBA's rate cut cycle - Where do we stand and what it means for consumers

When the price level goes up, there is both a gainer and a loser. Interestingly, inflation can be viewed positively or negatively depending on the individual viewpoint and rate of change. Let us take a case of people who own tangible assets, like property. Inflation may raise the value of the property, which they can sell at a higher rate and earn a good margin (though buyers of such assets may not be happy with inflation!).

Besides, inflation promotes investments, both by businesses in projects and by individuals in stocks of companies, as they expect better returns.

Breaking it down further- a moderate amount of inflation is generally considered to be a sign of a healthy economy. As the economy grows, demand for goods and services increase, pushing prices higher, thus incentivizing the producers to meet consumers demand. Subsequently, workers benefit because this economic growth drives an increase in demand for labour, leading to an increase in wages. Thereafter, these workers (with higher wages) consume more, and so this “virtuous” cycle continues.

It is imperative for a country’s financial regulator to keep inflation in check. This is done by implementing measures via monetary policy wherein a central bank or other committees determine the size and rate of growth of the money supply. The aim should ideally be to maintain price stability— a relatively constant level of inflation.

Other goals include moderate long-term interest rates and maximum employment that promote a stable financial environment. Monetary authorities too can contribute towards managing inflation via quantitative easing- keeping interest rates near zero, pursuing a bond-buying program. The central banks take into consideration both the micro and Macroeconomic Indicators while making any decision.

The government also plays a part in keeping inflation under check by maintaining a healthy balance of payment figures.