Data released by national agency Statistics Canada shows June CPI was up after a 0.4 percent decline in May. Prices gained in five of the eight major constituents over a year. The rebound was led by price rises in food and shelter while gasoline declined the most. Excluding gasoline, the CPI rose 1.2 per cent in June, says the statistics agency.

The change from May to June marks the fastest inflation turnaround since March 2011. 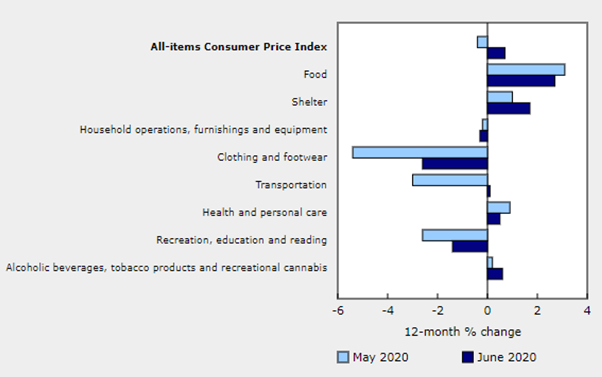 Among provinces, prices rose the most in Alberta, followed by Saskatchewan and Quebec.

CPI Rose In 9 Provinces from May to June (%) 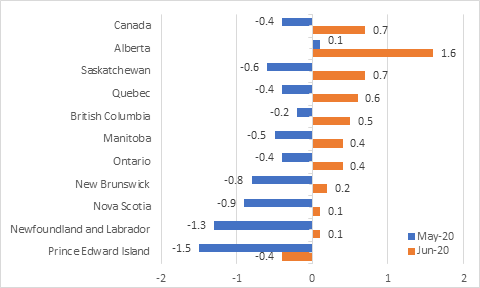 Employment levels also improved in June after three million jobs were lost between March and April amid government lockdown measures to curb the spread of the virus. Building on the 290,000 jobs created in May, employment rose by 5.8 percent, adding 952,900 more jobs in June, said the national statistics agency.

As the key Canadian indices crashed and the economy regressed to levels not witnessed since the second world war, the federal government continued injecting monetary support in the system with special pandemic-support programs and extension of wage subsidy program till year-end.

On the policy side, the Bank of Canada last week maintained its key interest rate near zero at 0.25 percent until the “two percent inflation target is sustainably achieved”. The central bank has projected annual inflation to be 0.6 per cent this year. To ease the fiscal pressures, the central bank is also gobbling up almost C$ 5 billion-worth Canadian government bonds every week through its quantitative easing tool, till economic recovery is well underway.

Bank of Canada’s revised Monetary Police Report projects the economy will attain its pre-pandemic growth levels only in 2022. It expects the real gross domestic product (GDP) to contract by 7.8 percent this year, before bouncing back by 5.1 percent in 2021 and 3.7 percent in 2022.