Simply put, Recession is a macro-economic phenomenon characterised by a dip in economic activity, fall in aggregate demand and soaring unemployment levels for an extended period of time. Some experts define the onset of recession with the negative economic growth rate for two consecutive quarters, as Technical Recession.

What are the Leading Indicators of an Economic Recession?

Economic monitoring agencies such as the National Bureau's Business Cycle Dating Committee maintains a chronology of U.S. business cycles in the forms of peaks and troughs. While the peak is defined as the month in which several macroeconomic indicators reach their highest level, a trough is identified as a month in which economic activity reaches a low point and begins to rise again for a sustained period. The period between a peak and a trough is a contraction or a recession, and the period between the trough and the peak is an expansion. 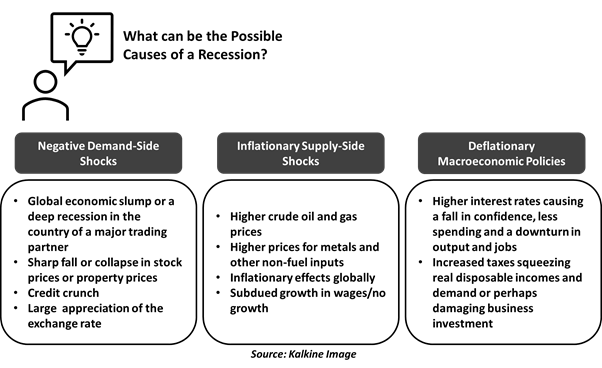 Predicting future recessions is not an easy economic phenomenon, given a lot of uncertain factors involved in economic forecasting. However, economists monitor macroeconomic fundamentals to gauge the recession scenario. Below are some of the leading indicators of looming threats of economic recession:

What were Chief Triggers Behind Previous Episodes of Recession?

Because the US is the largest economy of the world and has robust financial and trade linkages with several other economies, most of these internationally synchronized recession outbreaks also coincide with the US’ recessions.

With the easy and common access to world wide web in the mid to late 1990s, reckless fad investments were made by investors in technology stocks and internet-based companies, fuelling NASDAQ to record high levels of ~5,000 in the year 2000 from ~1,000 in the year 1995. While, the good times didn’t last, with NASDAQ crashing to ~1,100 by October 2002, wiping off 75 per cent of market value from the equity market.

Consequently, the US economy suffered a dot-com bubble recession, which induced massive job losses in the tech sector, triggering repetitive rate cuts by the Federal Reserve.

What are the Economic and Social Impacts of Recession?

Previous episodes of recession have been seen to be giving a dent to social and economic considerations of the nations as outlined below:

What are the Types of Recession and Recovery?

While there is no specific classification system to define recession shapes, economists tend to refer to four key shapes of recession and the resultant economic recovery:

What is the Difference Between Recession and Depression?

The key difference between recession and depression is usually marked by the duration and depth of an economic downturn. While a recession is characterized by a considerable dip in economic activity lasting for more than a few months in a more localized scenario, a depression is noted when an economic dip lasts for years, usually with a global reach.

What are Feasible Responses to an Economic Recession?

While recession casts a heavy blow to the nation/world’s economic, financial and social aspects, efficient policy responses play a crucial role in containing the downturn and charting out gradual recovery prospects. Some of the key policy responses are listed below:

Read Through Some Investment Strategies to Build Recession-Proof Stocks