The bitter-sweet side of the Australian economy has continued to be the subject of the analysts’ debate over the past few years. However, with the harsh blow by Covid-19 pandemic, the discussions which earlier surrounded the looming possibilities have suddenly morphed into paranoia concerning the exorbitant economic crisis, spawning the predictions on recession in Australia.

The employment figures released by the Australian Bureau of Statistics indicated a significant 1 pts rise in the unemployment rate in April 2020, which jumped to 6.2%. The agency highlighted that the massive month-to-month worrisome movement in the job’s stats could be attributed to the effects of restriction along with the responses by the Government, businesses and individuals. At the same time, the Commonwealth Bank predicts that the long-term crisis can wipe one-third of the house prices in the Australian market. 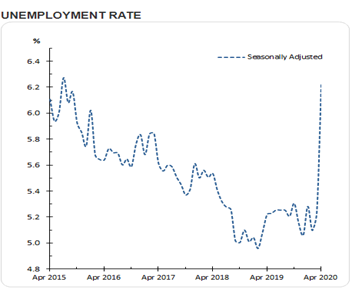 The data of the economic figures have created turbulence, scratching away the titbits of tranquillity from the Australian financial landscape. ABS reports that in seasonally adjusted chain volume terms, the Australian economy contracted by 0.3% in the March quarter, whereas the household saving ratio increased from 3.5% to 5.5%.

Commenting on the latest GDP statistics, ABS Chief Economist Bruce Hockman highlighted it as the “slowest through-the year growth” since the Great Recession and elucidated the commencement of the expected economic effect of the health-crisis. Meanwhile, Treasurer Josh Frydenberg also agreed about the crisis when questioned if the country is in recession.

The stock market does not appear to be on the same page with the hard-economic reality. The equity market and the economic scenario in the country demonstrate a bidirectional correlation. While the economy is wresting to emerge out of the crisis backed by the Government’s fiscal packages and RBA’s Quantitative easing programme, the Australian stock market has recovered from the bearish phase to the bullish phase.

ALSO READ: Is Australia in a V-shaped Recovery Zooming from the expected ‘U’ Style: 10 things changing around us

Australian market hitched a ride on the growing optimism and echoed a positive, upbeat momentum. As on 5 June 2020, S&P/ASX 200 has given a QTD return of 18.16% as many sectors recorded the operations further springing forth. It has transpired ambitious investors to leverage on the budding market growth while many yet remain apprehensive about building their portfolio as the economic headwind could flunk the financial plans.

The fear of one of the worst recessions and the dread over the second wave of infection has further catapulted the vitality of the building recession-proof stocks. In the eye of the storm, let us look at the few ways that can help you in building a recession-proof portfolio.

ALSO READ: Are You Prepared For The Next Recession? Take a look at Few Ways To Combat Recession

While the cure to the coronavirus yet remains in the clinical phases of testing, the remedy to counter the pandemic driven stock market volatility is often found in the diversification across the asset classes. The golden rule to investment, especially during the uncertain times is broadly efficacious in evading severe and abrupt market changes.

Besides the investments in the different sectors and asset types, the diversification within the company should also be evaluated. Thus, the company catering to the various segments of the consumers, having variety in the offerings and operating in the different markets are more cushioned to survive the economic shocks.

The investments in the commodity sector and fixed income along with the volatile equity market can together assist in scaling back the threats. Mutual funds can be a convenient way of ensuring the diversification while also evading the financial burden and excessive involvement that the diversification demands.

The defensive sector, unlike the cyclical ones, enjoys a throughout demand consistency owing to the people’s inclination to evade away the luxuries to safeguard the necessities. While the pandemic and restrictions hammered operations across sectors, the sustained need for the essentials and vitals were recorded in many areas. The same momentum can act as a shield to shade the portfolio from severe market downturns.

Meanwhile, the investors seeking dividend income also finds solace in the defensive sectors that fares well compared to the cyclical ones concerning the dividend payment.

The dynamics of continued business performance were reflected in the production of many companies as demands soared high in both the domestics and overseas market. The a2 Milk Company (ASX: A2M) recorded strong revenue performance in all regions, especially concerning its infant milk formula sales in China and Australia. Despite Covid-19 uncertainty, the company riding on the back of robust sales growth has raised its full-year EBITDA from that advised in February, and it now stands between 31% to 32%.

Investments in the undervalued blue-chip stocks mark the wise decisions to reap out substantial profits while dodging the risk that comes along with the recession. While the market stability generally suppresses the chances of firms with strong fundamentals to trade below their intrinsic value, the volatile state forces many fickle-minded investors to renounce even the stocks with the strong fundamentals.

The strong balance sheet and sufficient liquidity allow the firm to carry on the operations successfully, the results of which are reverberated in the share growth on the stock market front. ASX-listed BHP Group Limited (ASX: BHP) announced that the production guidance for FY20 remains unaltered for iron ore, petroleum and metallurgical coal, while copper guidance and energy coal production are under review.

The radical technological adoption became the new normal during the Covid-19 social distancing measures which carved out the cult of remote working and e-commerce utilisation. The intricate embedding of the latest tech reforms in our daily lives has garnered the focus on the tech stocks. Tech stocks which in the past often became the subject of investor’s apprehension in the earlier economic downturns emerged as a novel, safe haven in the Covid-19 crisis.

Afterpay Limited (ASX: APT) saw a rise in the number of its active customers to 5 million in May in the US market, symbolising the radical adoption of digital payment and buy-now-pay-later solutions. Meanwhile, the logistics cloud service provider, Wisetech Global Limited (ASX: WTC) owing to the flexibility of its SaaS Cloud-based business, it can adapt to the changing market conditions. The company, despite Covid-19, reaffirmed its F20 guidance.

Amidst the burgeoning trend of tech adoption which sees no bounds, betting on tech stocks may generate substantial returns. Meanwhile, focus also remains on evaluating the environmental sustainability dimension of the shares as the climatic issues indicated by last year’s Bushfire cannot be side-lined.