What is Gross Domestic Product (GDP)?

GDP refers to the total market value of goods and services produced by a country over a specific period. It is one of the most important economic indicators and is a commonly used benchmark against which economic well-being is measured.

In oversimplified terms, GDP is the quantity of goods and services produced by a country multiplied with their respective prices, summed over different sectors. However, there are various methods for categorising domestic produce into different sectors. This complicates the GDP calculation further away from its basic ‘quantity multiplied by price’ definition.

Market prices are derived by adding indirect taxes and subtracting subsidies to GDP at FC. The GDP figures that are often referred to as the ‘size’ of an economy are usually GDP calculated at Market Price. 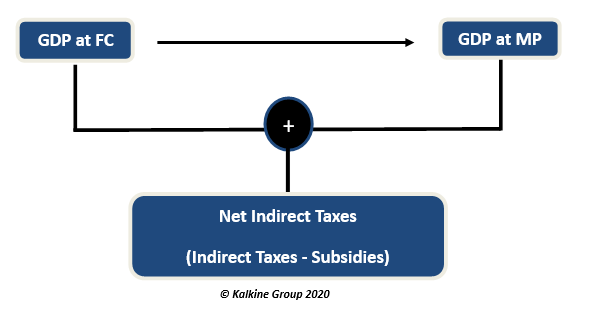 How is GDP calculated?

There are three approaches that are used to calculate GDP, namely Expenditure Approach, the Income Approach, and the Output Approach. GDP calculated from either of these would give the same results.

Consumption expenditure (C) refers to the expenditure done by consumers on everyday items as well as other household expenses,

Investment (I) is made by businesses and households,

All these components are from the ‘spending side’ of a transaction.

The producers of domestic goods and services are the factors of production and the income generated by them is known as the factor income. Using Income Approach, we can achieve Net National Income (NNI) which is different from GDP.

Here, the income approach formula for NNI is,

Now we can find out the GDP at FC using

And finally, GDP at MP using,

What are the different types of GDP?

GDP has two broad types: nominal GDP and real GDP. Nominal GDP includes the prices of the corresponding goods and services and is not adjusted for inflation. Whereas real GDP refers to the GDP adjusted for inflation and it gives a more accurate representation of the production levels in the economy. This allows for comparisons between different time periods. GDP deflator can be used to remove the effect of inflation on the economy and move from nominal to real GDP.

What are the risks associated with GDP as an economic indicator?

GDP as an economic indicator does not hold information about the entire economy. There are certain aspects that cannot be revealed through GDP figures. The socio-economic conditions, literacy levels, environmental damages done by a nation and the state of living conditions of a country are just some of the aspects that cannot be incorporated into GDP calculation.

It is quite possible that countries with high levels of GDP are achieving the same by harming the environment, while countries with low GDP rates are highly developed nations with good living standards and better literacy levels.

There have been various other indicators that capture these socio-economic aspects of a nation. One major indicator is the Human Development Index, which incorporates components ranging from literacy rates, to population and mortality rates. This is a more wholistic approach than GDP rate as it is more inclusive. There are various such indices adopted by countries which try to create the vision that overall strength of a nation is represented through a lot more than the rate at which it produces its output.

Would NZX retail stocks feel the effect of the Free trade Agreement?

Which are the hot 4 NZX Dividend stocks under NZ$10?

A look at Tesla’s Journey in 2021 and beyond

How are ASX retailers gearing up for Christmas 2021?

WeWork SPAC merger complete! What to know before investing in WE stock?

Is Evergrande bond default anxiety over?