How can you Define Economics?

Economics is one of the arms of social science discipline, which is concerned with the description and analysis of manufacturing, distribution and consumption of products and services.

The term ‘Economics’ is believed to be originated from the Greek word ‘Oikonomia’, which means household management. Initially, a Greek philosopher Aristotle defined Economics as a ‘science of household management’, but with time, its definition has changed.

Towards the end of the 18th century, the father of Economics Mr Adam Smith described Economics as a ‘Science of Wealth’, which investigates into the nature and reasons of the wealth of nations. Subsequently, several economists came up with their own definitions of ‘Economics’, some of which are listed in the below figure:

Also Read! What is Behavioural Economics?

What are the Three Fundamental Questions in Economics?

As every economy is limited by its technological knowledge and resources, the society has to answer three fundamental economic questions before making choices. These questions comprise what to produce, how to produce and for whom to produce.

Given the constraint on availability of resources, economic agents have to determine what to produce for an economy and in what quantity. In today’s economy, goods and services are typically produced based on demand and supply forces. In other words, firms produce commodities that are demanded by the consumers and refrain from making goods not in demand. This prevents the ineffective utilisation of resources and averts wastage.

For Whom to Produce?

When the product or service is produced, another key challenge is to analyse who will consume the produced output. In a free market economy, goods are provided to the section of society that carries the ability to pay for them. So, an individual’s income is used as the criteria to decide the quality and quantity of goods and services produced.

However, in more altruistic societies, products and services can also be produced for individuals who cannot afford or pay for them. For instance, free healthcare is provided in many western or advanced economies of the world.

Macroeconomics involves the study of structure, performance, decision-making and behavior of an aggregate economy. This branch of economics is primarily concerned with broader aspects like aggregate economic growth, unemployment, inflation, fiscal policy and monetary policy, overseas trade and overall standard of living.

On the flip side, microeconomics involves the study of economic interactions of a particular entity, individual or a business. This branch of economics deals with the demand and supply of goods and services in different markets, consumer behavior, dynamics in individual labour markets, taxes, government legislation and regulations.

What are the Fundamental Principles of Economics?

An American macroeconomist, N. Gregory Mankiw outlined ten fundamental principles of economics to provide a road map to individuals for understanding economic events. Below is the list of the principles highlighted by Mr Mankiw:

Are Economic Indicators Important to Investors?

Economic indicators are often being gauged by investors to understand where the economy is heading into. By following economic indicators, investors anticipate market volatility and discover potential trading opportunities. In other words, these indicators support investors in deciding when to purchase or sell their investments.

The below figure summarises some key macroeconomic indicators often being followed by investors to make smart investment decisions: 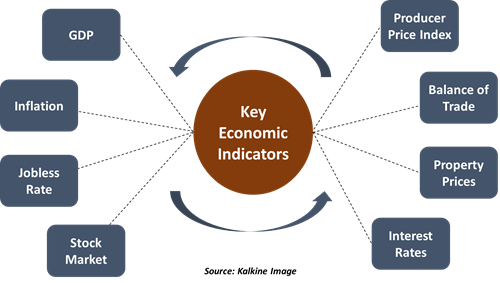 How is Equity Market Related to Economy?

A rally in the stock market may indicate better micro conditions or macro conditions, and the same is true vice a versa as well. However, there are other factors also that describe the foreplay between economics and equity market. Equity market is a forward-looking event, which is not just driven by economic forces, but also investors’ psychology, geo-political concerns and sectoral trends.

For instance, the COVID-19 crisis saw a weakening of fundamentals at both macro and micro levels, suppressing the market in the beginning. However, post digesting the event consequences, investors' psychology defined an altogether different charter for equity market revival, not resonating with weak economic fundamentals and bearish economic growth trends.

How has ASX reacted to previous Australian elections?