The term ‘fiscal policy’ has been formed from the word ‘fiscal’, which means anything related to government revenue or taxes. Fiscal policy refers to the measures taken by the government to influence the economy, especially through adjusting the levels of spending and taxes.

To make these alterations, the government has two key instruments at its disposal, as listed below:

Taxation: The government modifies the structure of tax rates in line with the circumstances prevailing in an economy. With the change in tax rates, the government is able to sway the average income of consumers, which further influences the level of consumption and real GDP.

Government Spending: Similar to taxation, government spending also carries the potential to increase or reduce the economic activity. The government utilises fiscal spending as a tool to stimulate public money flow to certain sectors that need an economic boost. Whoever obtains the funds from the government gets more money to spend, which in turn boosts aggregate demand and economic growth.

How can you Differentiate Between Monetary and Fiscal Policy?

While both fiscal and monetary policies are utilised to regulate economic activity over the course of time, the former is implemented by the government while the latter is conducted by the central bank. Moreover, the two policies majorly differ over the type of tools utilised by their respective authorities to stimulate economic growth.

The below figure summarises key differences between the two policies in a concise way: 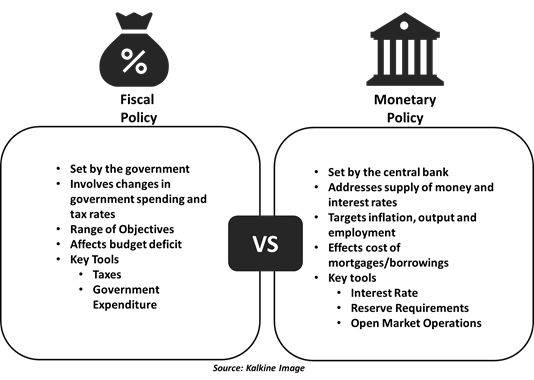 While monetary policy primarily targets output, inflation and employment; the fiscal policy does not focus on a specific goal but a range of objectives, as stated below: 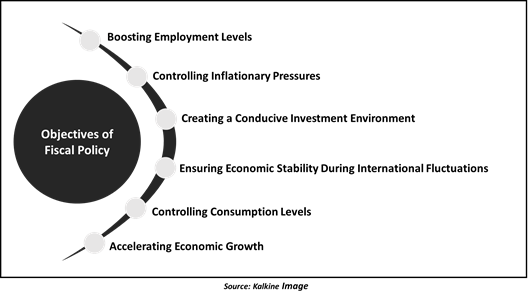 Here, increased government spending can be in the form of both purchase of goods and services by the government that directly improves economic activity, and transfers to people that indirectly stimulate economic activity when individuals spend those funds. Similarly, decreased tax revenue through tax cuts also bolsters aggregate demand indirectly.

While the expansionary policy can lessen the negative impacts of recession on an economy, it can also trigger the following problems:

Contractionary Fiscal Policy: When the economy moves from recession to an expansion phase, policymakers may decide to withdraw the fiscal stimulus by applying the contractionary fiscal policy. Such policy involves a rise in tax revenue, a fall in government spending or a combination of the two to slow economic activity temporarily.

It is important to note that monetary policy can be used in conjunction with fiscal policy to limit the undesirable impacts of expansionary or contractionary fiscal policy. 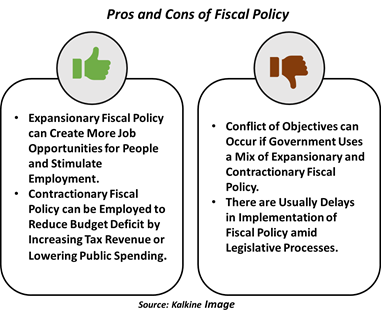 For instance, during the 2008-2009 Global Financial Crisis (GFC), the governments across the world resorted to fiscal policy as a measure to improve the performance of economies. In the US, Congress introduced large scale fiscal packages to support sectors like energy, transportation and education to sail through the crisis.

While the fiscal stimulus package, together with deep recession, intensified the government budget deficit during the period, most economists concluded that the government stimulus was effective and helped boost consumer confidence. In fact, several economists argued that the unemployment rate in the US would have peaked to 11 per cent instead of 9.6 per cent in 2010 in the absence of a fiscal stimulus.

As time went by, a fresh data set suggested fiscal policy having a considerable impact as a countercyclical economic policy instrument to tackle the effects of the global financial crisis.

Akin to GFC, several fiscal stimulus bills have been enacted by governments across the world in response to the COVID-19 pandemic in 2020 to bring economies back on feet. The fiscal stimulus provided by governments against the coronavirus crisis included direct cash transfers to consumers, forgivable loans to small businesses, and increased unemployment benefits, among others. The Global Virus Crisis of 2020 also saw countries across the world utilising a mix of fiscal and monetary policy approach to aid their growth prospects.