What is Full Employment?

Full employment refers to the state when every individual in the economy who is willing and able to work is employed. The employed workforce does not include senior citizens and students, as they are not willing to work. It may also exclude the personnel that are not physically fit to work.

It can also be understood as a situation where there is no involuntary unemployment. Under full employment, all resources in the economy are fully utilised. Efficient use of resources would enable the economy to reach the maximum level of output attainable by it.

However, According to Keynes, full employment refers to that state when an increase in aggregate demand does not lead to a rise in the level of employment and output. Keynes also states that there would ideally never be full employment in the economy, due to a certain level of voluntary unemployment always being present in it.

A full employment scenario occurs when the economy functions on the Production Possibility Curve and not below it. Every point on the PPF curve represents an efficient production level, where the resources are fully utilised. 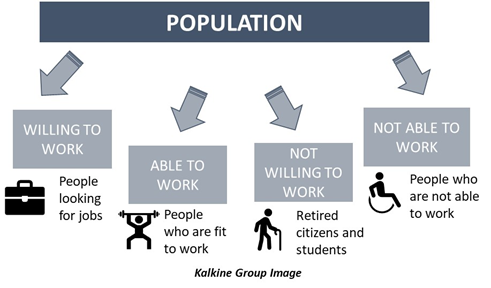 How do economies reach full employment?

Full employment is not a situation that can be practically observed. There always exists some level of unemployment in the economy. There can be many reasons for an economy to have unemployment. Based on these reasons, unemployment can be classified into the following types:

Many of these unemployment types are caused by external factors that are beyond the control of individuals. External factors like government policies, technological developments, and business cycle downturns end up hurting the availability of jobs in the market. Even if all the elements in the economy are favourable, individuals might be in between jobs, making them frictionally unemployed.

It becomes difficult to break down which type of unemployment might be prevalent if there are no clear market indicators. It is safe to say that most of these factors are hard to avoid or eliminate. However, once the government realises that there is unemployment in the economy, they can provide relief packages to unemployed people.

What is meant by NAIRU?

NAIRU refers to the Non-Accelerating Inflation of Unemployment, which is the threshold to measure the level of unemployment. It is calculated by taking the historical relationship between the unemployment rate and any changes in inflation.

What is meant by Full Employment GDP?

Full employment GDP can be understood as a hypothetical level of GDP attained at the full employment level. It is the maximum output that a country can produce given its resources and their efficient use.

The Job finding rate refers to the rate at which an average employee might find a job. An ideal situation would see workers finding jobs immediately. However, in the real-world scenario, it may take up a very long time for an employee to find a job that he/she likes. Because of this, real-world job finding rates can be extremely low.