What is a central bank?

A central bank is the prime monetary body in a country that oversees the regulation of the monetary policy as well as the functioning of all other banks. A central bank function in the same way as a normal bank does, the difference being the fact that it lends to other financial institutions rather than to the public, and the fact that it has the authority to print the currency.

Central banks are non-commercial banks and do not deal with the public directly. However, the aim of central banks is to facilitate spending and saving of the consumers. Central banks work independently of the government.

Any mode of payment that is deemed acceptable by the central banks cannot be rejected as payment by anyone in the country.

Why is the central bank important?

The central bank has the responsibility of regulating the financial sector. It performs the following functions:

If money is printed beyond the permissible level, then it can lead to inflation in an economy which leads to severe downturns in the economy.

For instance, when the government wants to decrease the money supply in the market, then they can sell government bonds. As people purchase these bonds, they are left with left disposable cash. Alternatively, when the government wants to increase the money supply, then they can buy back these bonds from the market, thereby increasing the disposable cash in the hands of the people.

Currency reserves can also be used to influence the inflation rate in an economy. They can devalue or revalue their currency using these foreign reserves. 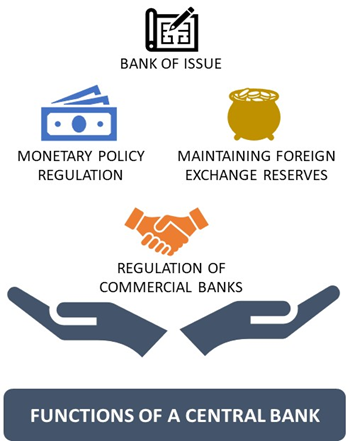 How did the idea of a central bank come into existence?

One of the first financial institutions recognized as a central bank was the Swedish Riskbank. This was formed as a joint stock company with the primary purpose to lend government funds and act as a clearing house. Following this, central banks were formed for the issuing of currency and to purchase the government debt.

Most of these early institutions were private entities financing government debt. These central banks also provided loans to other banks and thus gained a position as the lender of the last resort. They held deposits of other banks as well, which helped them provide loans to other banks. These roles were limited to lending in times of need and did not include other macroeconomic positions like maintaining inflation levels and monetary expansion, etc.

The roles associated with central banks started to take a defining shape post World War I. When countries had to manage the problems on unemployment, inflation, they decided to expand the functions of the central bank.

ASX off to a positive start; Adbri, Novonix lead gains

ASX 200 to rebound after US tech stocks rally