What is the Production Possibility Curve or PPC?

A production possibility curve depicts the maximum output that can be produced in an economy with the given resources. The resources used to make these goods refer to the factors of production in the economy.

PPC may sometimes also be referred to as the production possibility frontier, or PPF. PPC depicts the trade-offs faced by producers in the economy. Due to the scarcity of resources, producers must allocate these resources into the production of those goods that derive maximum welfare.

For instance, consider an economy that can produce only two goods, given the resources that it is endowed with. The two goods produced are war machinery and bread. However, the producers must decide how much of each to produce. During a war, production of war equipment might increase; however, when the war ends, bread production would increase and therefore, production of war equipment must decrease because of limited availability of inputs.

How is the PPF represented graphically? 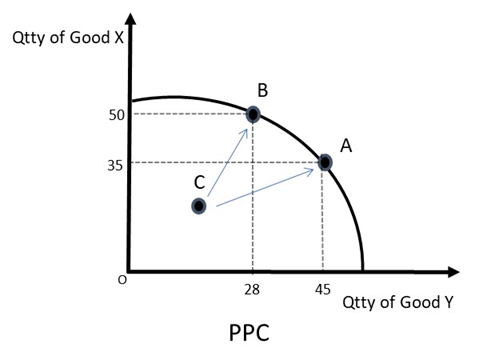 Point C lies inside the PPC curve. This means that it is an inefficient allocation of resources. Point C fails to efficiently utilise the entire amount of labour, land, and capital that the economy possesses. Thus, if the resources were allocated more efficiently and used to the fullest, then the allocation would lie on the curve and not inside it.

Any point lying outside the PPC curve is not attainable as the economy is not equipped with enough resources to produce that allocation of goods.

Why is the PPF concave to the origin?

The PPF is downward sloping because of the trade-off that exists between the production of the two goods depicted in the curve. Due to the limited availability of factor inputs, units of a good must be sacrificed to produce an additional unit of the other good.

However, this trade-off increases with the number of goods produced. Consider the following diagram: 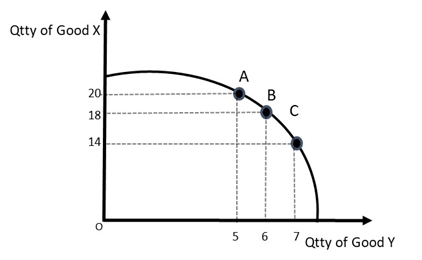 When does a PPC curve shift?

An economy may underproduce in times of a recession. Thus, in the case of an economic slowdown, an economy might function at a point inside the PPC rather than at a point that lies on the curve. 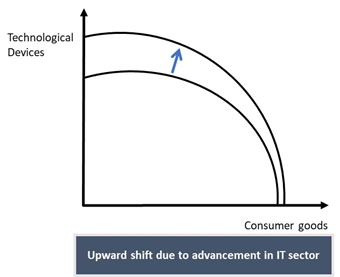 What does the PPC tell about the economy?

A PPC only tells how much of one good must be sacrificed to produce one unit of the other good. However, it does not describe how much of both goods must be produced in the economy. Thus, producers and the government must decide on how much to produce.

In a free market, the law of demand and law of supply govern the quantity of goods produced. The PPF ultimately determines the amount of supply in the economy. However, it can not determine the demand level in the economy. Therefore, PPC is one of the prime tools used in macroeconomics to determine the aggregate supply level and determine whether the economy is functioning efficiently or not.