What are Interest Rates?

Interest rate can be defined as the amount a bank or a lender charges to the borrower for the use of its assets or money. The rate a bank pays to its depositors for keeping money in a savings account, recurring deposit or fixed deposit is also termed as an interest rate.

Interest rates are frequently charged for mortgages and personal loans, along with loans for the purchase of buildings, cars and other consumer goods. Besides, corporates also take business loans from the financial institution based on prevailing interest rates.

While the term interest rate is used in multiple domains, including cost of borrowing, return on investments and return on savings, it is primarily known for the rate (cash rate or bank rate) charged by Central Banks on its loans and advances to commercial banks. The cash rate further stimulates the rate charged by commercial banks on consumers’ borrowings and saving deposits.

How are Interest Rates Calculated in General?

The lenders or banks uses two different kinds of interest rate calculations, as stated below:

Simple Interest: Such interest is calculated on the principal amount of a loan or deposit, using the following formula:

What are the Key Determinants of Interest Rates?

There are multiple factors that influence the level of interest rates in an economy, as highlighted below: 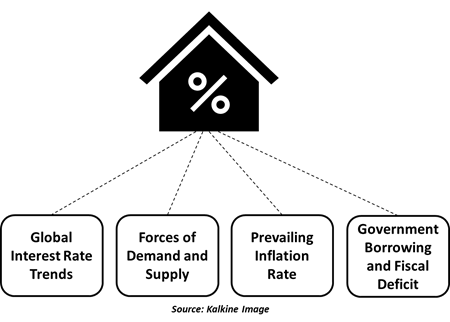 Similarly, higher interest rates are also used as a tool to attract overseas capital from investors and influence the country’s exchange rate.

If the level of inflation is high in an economy, Central Bank prefers to raise the interest rates so as to increase the cost of borrowings. This process makes the borrowing expensive, keeps a check on demand and controls the money supply, thereby bringing inflation in the target range.

While these factors drive interest rates at a broader level, the rates charged by individual banks on customers’ borrowings or loans depend on several other factors, including credit score, Loan-to-Value, loan size, credit history, debt ratio, employment type, length of loan and available documentation.

How Interest Rates Play a Role in Monetary Policy?

Central banks use monetary policy as an important tool to increase or decrease the availability of a credit in an economy, which further affects the aggregate demand and consumer spending.

To stimulate consumer spending and business activities, Central Banks often employ an expansionary monetary policy by decreasing the level of interest rates, in order to foster the money supply. The key objective of an expansionary policy is to fuel economic growth. For instance, multiple Central Banks reduced their interest rates to record low levels during COVID-19 outbreak to bring sustenance in their respective economies.

On the other hand, Central Banks use contractionary monetary policy by increasing the level of interest rates to control inflation and keep a check on money flowing into the economies. A surge in the interest rates makes borrowing expensive, discouraging overall demand and bringing inflation under check.

What is Negative Interest Rate? Is It a Reliable Policy Tool?

The European Central Bank was the first monetary authority to implement a negative interest rate policy, to deal with the Eurozone Crisis in 2014. Besides, the Bank of Japan has also kept its interest rate negative since 2016 in order to fight off deflation.

Below are some key advantages and disadvantages often discussed by economists with respect to negative interest rate policy: 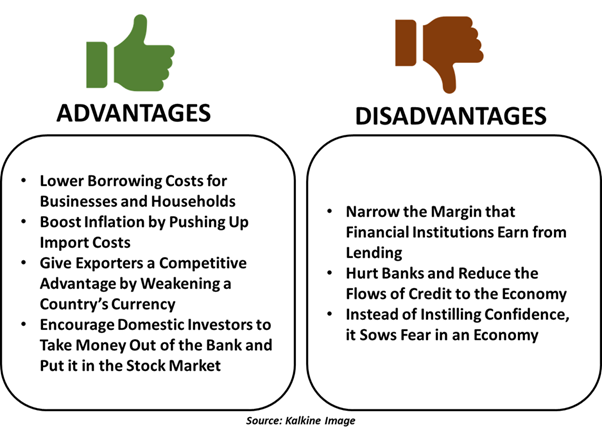 Do Interest Rates Impact Equity Markets? If Yes, How?

Investors usually keep a close watch on Central Bank’s movements to gauge the health of an economy. Consequently, when the Central Bank increases or decreases the level of interest rates, stock markets react instantaneously to interest rate changes.

It has been observed that the equity market responds negatively to a rise in interest rates amid anticipation of an upsurge in companies’ costs due to expensive borrowings. This induces investors to invest more in deposits and bonds, discouraging stock market investment. However, a gradual increase in interest rates is often seen to be boosting investors’ confidence in the economy and stock market.

On the contrary, the equity market usually cheers up in response to interest rate dip, which can act as a catalyst of growth in promoting corporate borrowings. Besides, lower interest rates encourage consumer spending amid low-cost borrowing, driving economic growth.

GOOD READ: Understand the Linkages between Economics and the Equity Market

Should you buy these 2 consumer stocks amid price hikes?

Top 7 REITs with over 50% YTD returns to explore

Houzz IPO: When is the home remodeling company going public?