What is a tariff?

Tariffs are usually imposed as an economic tool to improve the balance of trade as they decrease the imports. They are also targeted at protecting the domestic producers from competitive foreign goods. Tariffs can also be imposed on exports of goods and services, although that is seldom the case. It is done to discourage exports of certain goods and services.

Tariffs are also used as a political tool. Governments may sometimes favour certain countries with whom they have political ties, while they may try to limit trade with other countries owing to technological, economic and political spats.

How are tariffs levied?

Tariffs have three broad types based on how they are levied:

What impacts can a tariff have?

Import tariffs can be beneficial to an economy in many ways. As imports become expensive, consumers shift towards domestic goods. This competitive advantage enjoyed by domestic goods translates into increased production along with higher profits to domestic firms. Thus, as firms start gaining increased profits, they expand and hire more workers. This increases the overall employment in the economy.

Therefore, tariffs affect two major areas positively: the domestic competitiveness of firms as well as the employment rate in the economy.

Tariffs can sometimes also be implemented to protect the domestic economy from infiltration of foreign produce. Sometimes, highly developed nations impose import duties to safeguard their economies from dumping of foreign goods. This kind of tariff is called an anti-dumping duty which is used when a country is suspected of exporting a good at a rate which is lower than the rate at which the same good is sold in their domestic markets.

How does a tariff work? 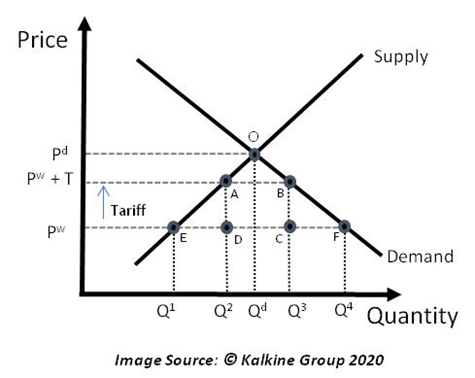 In the figure above, point O represents the situation of autarky or a closed economy that has no trade with foreign countries. Now consider the effects of the economy opening its borders to international trade. The international price of the same good is Pw, which is significantly lower than Pd, the domestic price. Under the assumptions of free trade and a small domestic economy, the domestic prices would also become equal to Pw.

At price Pw, the domestic demand is Q4 while the domestic supply is Q1. The difference between the two is met by the quantity of imports.

The lower price of the imports would make them preferable to the domestic produce. However, when a specific tariff is introduced on the imports, the price of the imported good rises to Pw + T. This makes the good more expensive and thus reduces its imports into the economy from Q1Q4 to Q2Q3.

Who are the winners and losers when a tariff is implemented?

The welfare implications of a tariff are a subject of popular debate. Many theorists argue that tariffs bring distortions into the economy. 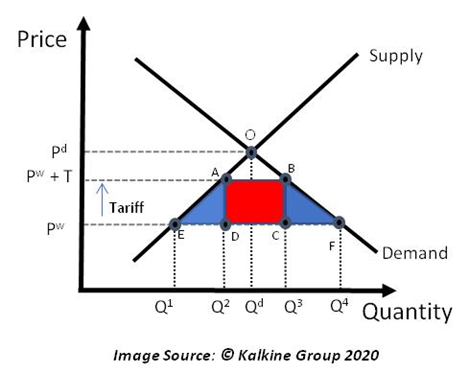 Therefore, domestic producers gain from a tariff. The supply has increased from Point E to point A. The demand has come down from point F to point B. The government also gains a lumpsum amount equal to AD multiplied with DC, which is the tariff revenue. Thus, both producers and the government are gaining from a tariff.

However, the entire process is giving rise to a deadweight loss which is represented through triangles AED and BCF, both coloured in blue. These two triangles are not utilised anywhere and are lost in the process of tariff implementation.

Thus, there is a welfare loss associated with tariffs, that is paid by the consumers. The consumers could afford a greater amount of the good at price Pw. However, when prices are increased to PW + T, part of welfare lost by consumers goes to producers, and a part of it goes to the government. But triangles AED and BCF are lost in this process.

Therefore, tariffs cause a distortion in a free market and can even lead to many adverse economic repercussions. Thus, for a small economy, tariffs need to be implemented with proper regulation and without any intent of harming any country’s producers. Rather, the intent should be to protect the domestic producers. The same might not be true for a large economy as any protectionist intent by one country can trigger a trade war between several countries as seen in a few past scenarios.

Is Australia’s coal export boom about to end?

ALF, PGW - Check out performance of agri stocks as cost of fertilisers rises

MWE, FWL: 2 wine stocks to watch after FTA with UK

Australia-India 'groundbreaking' trade deal: How will it benefit both nations?