What is Trade War?

The term trade war is applied when two nations proceed at war with each other, not through military operations but by imposing tariffs and quotas on imports from a trading partner. The term is commonly used worldwide as many nations are continually competing with each other over the supremacy of the economy. These restrictions are implemented to harm the rival country financially.

The foreign country retaliates with similar types of trade sanctions which is referred to as trade protectionism. Under the protectionist policies, the government encourages the consumption of domestic products over imported goods. The trade barrier imposition damages trading partners' economies and devalue its domestic currency. 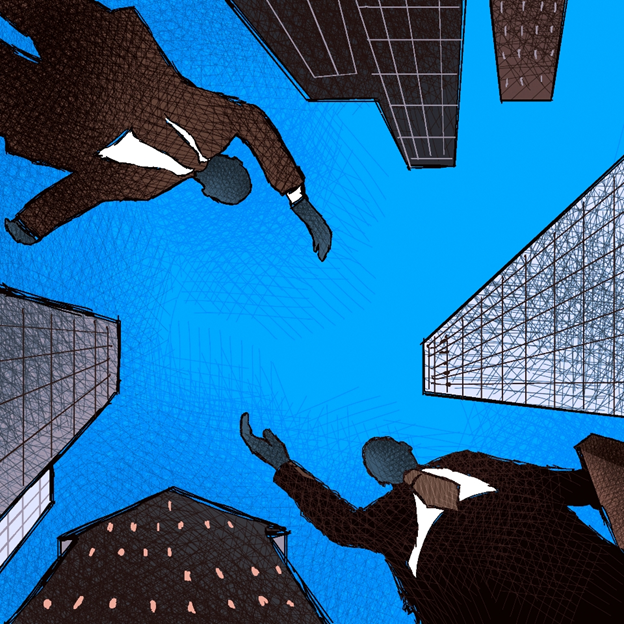 What happens when countries indulge in the trade war?

Trade war begins when a nation wants to protect their jobs and domestic industries. They may do this by an increase in import tariffs or imposing restrictions in trade. This may lead to a boost in domestic economy and reduction of dependence on the foreign country for goods and materials.

As the products from the foreign country stop penetrating the market or its demand are lowered because of higher prices, the local products see a growing request from domestic customers. If the local business grows because of such policies, it results in the ever-increasing need for jobs as well; however, in the long run, trade war bequeaths its impacts on both the countries.

The consequences of a trade war can be as severe as depressing economic growth and triggering inflation as the prices of imports increased because of the tariffs.

A phrase Beggar-thy-neighbor policy refers to this situation when an economic policy is implemented to benefit the country while harming the country's neighbours or trading partners in international trade. Such policies are ideated to protect the domestic economy while reducing the dependency on imports and increasing exports.

Adam Smith, a Scottish philosopher who is considered to be a founder of modern economics, referred to the beggar-thy-neighbour implementation in the trade war. He criticised mercantilism; a dominant economic system prevailed in Europe from the 16th to the 18th century. Economists soon concluded that such policies could trigger trade wars and push countries involved in autarky - a system of economic self-sufficiency and limited trade. A state like this is hugely detrimental for a country's economic growth. 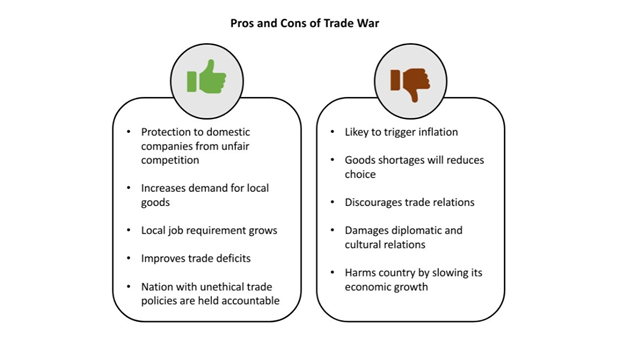 What are the advantages and disadvantages of the trade war?

The most important advantage a trade war offers is that the policies aid companies to flourish. When the government enforces tariffs on imports, these products become expensive. The similar domestic product in the market is, however, available at a competitive price.

The buyers would prefer to obtain local goods compared to the imported product, which leads the domestic companies to grow and prosper. Once the company becomes a prominent player in the local region, it has a higher possibility to expand internationally and build a more influential company.

Another benefit trade war provides is that if one country is imposing tariffs and restrictions policies on another country and the country in return is not offering any retaliation then in the international arena, the government will be considered weak. Diplomatically its reputation will be a vulnerable nation who does not retaliate to such grave threats. Countries usually retaliate if such a situation arises in order to safeguard its international status.

Not all countries trade in an honest manner. Some dominating countries dump their inferior products to other countries. The consumers of the nation stand at risk by buying low-quality goods. So, when the trade war occurs, it ensures that such ill practices are restrained and kept in check.

A biggest disadvantage trade war has is that it increases inflation exponentially. This tariff war tends to create an artificial shortage of goods, which leads to the surge price of goods—ultimately causing inflation which then lowers the standard of living for both countries involved in the trade war.

Once the trade war is started, it has a tendency to continue longer. It does not just damage the economic backbone of the countries involved, but diplomatically weaken the relationships. So instead of reasonably talking terms, the countries indulge in tariff and restrictions wars.

Such consequential situations hurt the cultural connections as well, which the countries could be nurturing for many years. In the long run, trade war shows its repercussions by incapacitating both countries, if not equally but on similar levels.

Because trade war provides a suitable environment for the local companies to flourish, in the long run, both involved countries can eventually become big and act dominant. The lack of competition from the international market renders a safe haven to create a monopoly.

With both country's companies behaving influential in their space, the customers have greater chances to suffer from higher prices and no alternative. Because of multinational companies, domestic companies always feel threatened by healthy competition and provide the customer with good quality goods at competitive rates.

Which telecom stocks can you look at amid the cost-of-living crisis?

Home buyers with mortgages to lose buying power next year

Why is Anson (ASX:ASN) on a gaining spree today?

Here’s why Arafura (ASX:ARU) shares are gaining on ASX today