What is a Monopoly?

A monopoly occurs when a firm is controlling a substantial market share in any given market. The threshold to deem a business a monopoly rests with the laws of any jurisdiction.

Simply, it refers to a market situation where a firm has a dominating position in an industry.

The owner can also sell exclusive rights to other parties like songwriters have rights over their songs.

Historically, the Governments across jurisdictions-built monopolies across goods and services destined for the public good and social cause such as postal mail, railways, but not limited to industries like power, mining, banking.

The ramifications of free markets have uprooted monopolies in the private world, and firms have gone on to capture large market share driven by numerous factors, including product utility, innovation, intellectual property systems and more liberal laws.

Perhaps investors love monopolies. Firms that construct a superior level of barriers to entry carry the arsenal to thrive in markets as the potential of new competition is bleak.

It is the competition that sets monopolies apart from other businesses. Since competition is limited, a monopolist can sustain supernormal profits in the long run.

Competition in any monopoly is suppressed along with its potential benefits, therefore growing monopolies become a problem in an economy. Consequently, it raises prospects of more stringent competition and antitrust laws. 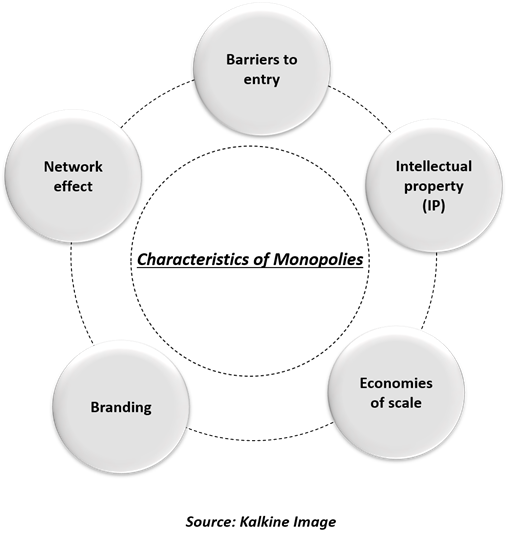 Barriers to entry: It literally means the restrictions, inability or incompetence of new players to enter an established market where the existing player commands higher barriers to entry.

Firms develop processes, products or services that are very hard to replicate, keeping new market players out of the competition. Companies that naturally acquire such status are said to have a moat around them. Term made famous in the investing world by Warren Buffett.

But it is perennial for proprietary technology and IP to be far more superior than the next available substitutes in the market to gain a monopoly.

A meaningful gap between the next best alternatives will likely provide an advantage. IP rights allow a firm to construct barriers to entry in its market.

Economies of scale: It is perhaps the intention of almost all companies to achieve economies of scale. A large scale production enables firms to sell products in large volumes and lower margin.

Under economies of scale, firms have centralised purchasing, which improves the scale of business and average cost per unit.

Branding: Developing a brand will enable a firm to have a differentiated product which may provide different levels of utility to customers. It is a brand which creates perceptual value for its customers to attain a better position in the market.

A firm has a monopoly over its brand, therefore developing a powerful brand is a way to achieve a monopoly. Firms are inclined to develop brand loyalty and brand awareness.

Networking: When all your surrounding is using the same product or service, you might be inclined to use it as well. Twitter, Facebook, Instagram, LinkedIn are some examples of services that thrive on network effects.

What are the types of competition?

Perfect competition: It is a market in which there are large number of buyers and sellers. As a hypothetical market, the competition is assumed at its greatest possible level. Buyers and sellers have all the possible knowledge of products or services.

Pricing is derived from the prevailing demand and supply in the market. There are no barriers to entry, and firms sell similar products.

Monopolistic competition: Under this type, the market has many players similar to perfect competition. Customers perceive that products sold by sellers are differentiated even though products serve a similar purpose.

A perception of differentiated products is developed by various factors, including brand name, style, quality, networking effects. People may prefer Coke over Pepsi, despite both products being almost same. Behavioural economics has been a popular study these days to understand the human mind and make products more targeted to its audience.

Pricing is quite active in monopolistic markets because a meaningful divergence in prices of two similar products can force customers to choose lower-priced products. As a result, sellers would try to match the price.

Oligopoly: In an oligopoly, the market is concentrated with few sellers of a product. Sellers also control a substantial part of the market because of a few numbers of competitors.

Since products or services are similar, the pricing remains active in an oligopoly. A promotional offer by a firm will force others to replicate or at least a lower price of the product or service.

Joseph Schumpeter introduced the concept of creative destruction. He was of the belief that business cycles under capitalism could derail large scale players in a market by way of smaller new entries in a market.

It is important to evolve with changing technologies since smaller new entrants with disruptive technology and innovation could build competitive advantages over existing large firms in a market.

Rex (ASX:REX) to add more Boeings to its fleet, thanks to bumper July results

Here’s how much Telstra (ASX:TLS) shares have gained in a year

What is Alec Monopoly NFT collection? Is it expensive?

What is Red Hare NFT Index and how reliable is it?

What is Alec Monopoly NFT collection? Is it expensive?

The Uber Files – a Story of Political and Entrepreneurial Intrigue

Decentralized Social (DESO) crypto: Why is this token seeing a fall today?