What is Deadweight Loss?

Deadweight loss is a burden on the economy, as it represents a level of welfare that is achievable by an economy given its production constraints. However, an external force is not allowing that potential to be achieved. This external force can come in the form of taxes, price ceiling, price flooring.

When the demand and supply are not in equilibrium then a deadweight loss arises. Thus, it is a cost to the society and it reduces the overall welfare of a society.

Under what circumstances a deadweight loss occurs? 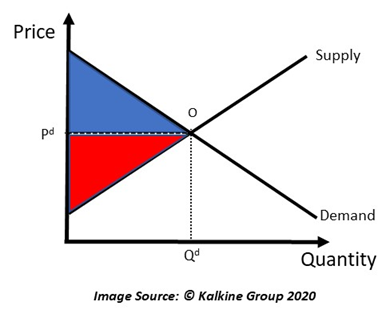 Now suppose a tax is introduced into this framework. This is a market distortion, as the optimal price and quantity levels would change now. 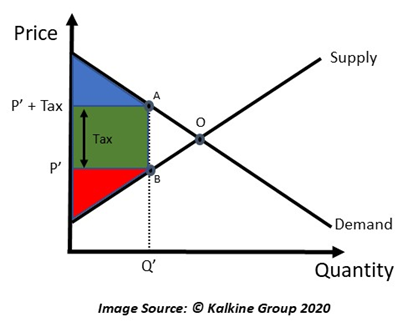 Part of these lost surpluses are transferred to the government through tax revenue, while part of them are wasted. The green box in the middle is the revenue of the tax received by the government.

The triangle OAB is the surplus that goes wasted and is not adjusted anywhere else. This is the deadweight loss.

Another important aspect to notice is that the overall production in the economy is reduced from the optimal Qd to Q’. The overall welfare of the society is reduced by an amount equal to the area of triangle OAB.

Similarly, price floors are like a lower bound, set by the government, below which they cannot charge their customers. Minimum wages can be considered an example of price flooring. Firms that are unable to pay even the minimum wages mandated by the government would have to lay off workers. This leads to an increase in unemployment which reduces the total output in the economy. Thus, increased unemployment is a deadweight loss.

Monopolies charge prices that are much higher than the marginal cost. This effectively resembles the case of a tax, where prices increase for the consumer because of the tax. A major difference is also the fact that the revenue collected under monopolies are all a part of producer surplus, therefore, this surplus is not utilised as public expenditure.

How is Deadweight loss calculated? 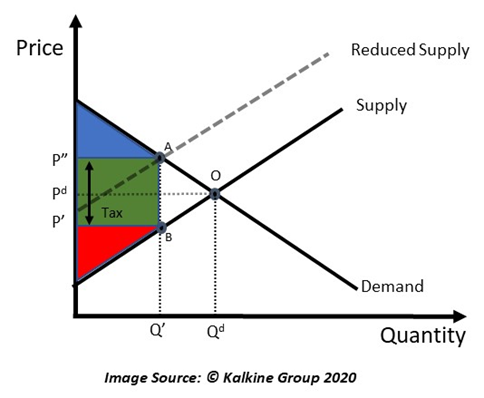 As the tax is implemented, the supply curve reduces as shown above. The consumers are paying price P”, while the producers are earning price P’. Quantity has been reduced to Q’.

The area of triangle OAB can be derived using the formula for the area od triangle, which is

Therefore, area of triangle OAB is

What factors affect the quantity of the deadweight loss?

However, if either of the curves are highly elastic, then the deadweight loss would be high. This happens because the quantity adjusts easily with prices. Therefore, as prices increase with taxation, quantity demanded would immediately fall, while the quantity supplied would increase.

Therefore, it would make sense for the government to tax the inelastic goods, as they would not create as much deadweight loss as the elastic goods. However, deadweight loss cannot be eliminated. Therefore, distortionary practices like taxes, subsidies, price ceilings and floorings as well as the formation of a monopoly should be highly regulated before they are implemented.

What is market correction and how to prepare for it?

What helped IAG (ASX:IAG) return to profit in FY22

A lithium-ion battery (LIB) is an umbrella term used for the group of rechargeable battery types in which the lithium ions migrate from the negative to the posi......
[ Read More ]