What is Welfare Economics?

Welfare economics comes under the umbrella of public finance and is a subdivision of economics through which the marketer is assisted to improve human and social well being. This method also helps one understand how to boost business efficiency and ensure sustainability of the business ecosystem. Without using microeconomics, marketers can use this technique to conclude the macroeconomic scale and evaluate the wellbeing at an aggregate level.

The critical aspect of welfare economics is to distribute the resources efficiently among masses and evaluate how it impacts social welfare. It is primarily practised to assess income distribution and the consequences of everyday products and determining the prosperity of an economy. It attempts to create components to measure the different levels of changes on the market conditions, including demand, supply, price, and quantity can be effectively measured through this process.

In simpler words, welfare economics is a cost-benefit analysis which evaluates and shapes resources for economic activities for the society. The modern-day welfare economics is a science-based on mathematical, psychological and moral-political aspects in which scarce resources are allocated for personal or public welfare maximization as an objective. Interestingly, many  progressive government bodies have started adopting the studies of behavioural economics to efficiently manage the reach.

More on the this: Why Move the Earth When A Nudge Can Do! Simple Solutions to Complicated Problems

Who invented the concept of welfare economics, and why?

Alfred Marshall (1842–1924) is the Father of welfare economics, and his contribution is considered as a toolbox of welfare economics. In his book Principles of Economics, Marshall has covered a number of inventions and ideas to enhance the growth of output. He outlined a process for the betterment of all the classes of society and especially the poor. His approach to the method was heavily output-oriented, making it a very popular concept even in present times.

It is believed that Marshall's many unpublished concepts related to welfare economics emphasises on the welfare state and explains the possibilities of the nations taking initiatives for the wellbeing of the society with a particular highlight on the poor section of the community.

But if we look back in the past, in the 3rd century BCE, Emperor Ashoka of India proposed welfare for its people and since then history mentions the Roman empire in Europe or the Song Dynasty in China or Catholic Church, they all provided resources to the needy as a part of the economic system. Even today many states like Nordic countries, Germany, France, New Zealand, the United Kingdom and Uruguay claim to be welfare states as they provide social as well as civil and political rights to its people of all classes.

But why is it important?

Because it affects us all.

Welfare economics is a guidelines tool to create an effective public policy. While there are many methods and measures to evaluate social issues, welfare economics is applied widely across the world. For instance, income distribution among different populations affects fiscal policies. With this method, a needy group can get benefited in taxation, social funding and allocation of resources to the need.

Welfare economics revolves around these aspects: 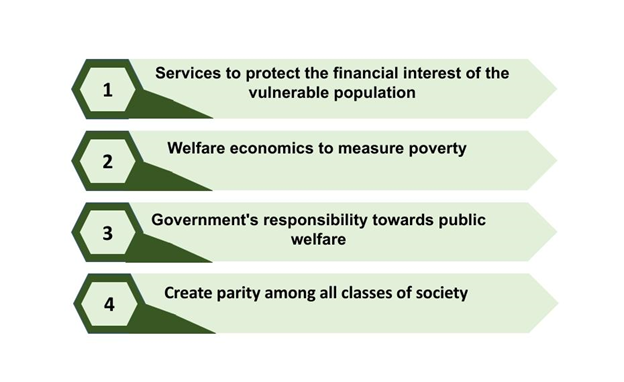 Welfare economics help us approach the objective to provide for adequate economic equality for everyone in the state. It is imperative to comprehend that the world works on the Pareto principle - roughly 80% of the effects come from 20% of the causes. Each person's actions affect the welfare of other people, every day touching each other by large. Governments decisions to provide subsidies and financial packages through effective public policies affect across the demographics in the society. For instance, with the current coronavirus (COVID-19) pandemic, many people have lost their jobs and are in cash reserve mode. When the government distributes unique stimulus and financial packages handing out cash, people will spend it in the market, consuming various products and services, eventually increasing and continuing the liquidity in the market. Hence coming up with practical solutions to keep the economy inflow is determined by the use of welfare economics.

Welfare can be of various kinds such as public education, public infrastructure, law enforcement and so on. The entire system is benefited from its publicly provided aid. Taxation of income and using it for general wellbeing is also a universally accepted form of welfare economics in almost all democratic countries.

What are the basic principles of welfare economics?

Better distribution of the nation's wealth in order to create more wealth and parity among all classes. We see economies growing when people are becoming prosperous while saying so, most of the people around the world are workers. With more job creations and better-paying jobs, the economic growth and expansion accelerate, and the working class is the driving force behind it. The democratic socialism practised by most of the progressive nations in the world is to create and distribute the wealth mainly to elevate the basic standard of living of its people and eradicate poverty. When people are above poverty, and they have money to spend, the money flow increases, and ultimately the economy grows.

On the other hand, welfare economy policies also stress on not harming the healthy to help the unfortunate and the empathy for vulnerable sections of the society. If the rich resent the poor, they will not participate in promoting and uplifting the poor. Through welfare economics, prosperous community is created with effective subsidies and policies.