What is a subsidy?

A subsidy is an incentive given by the government to households and businesses on certain goods and services. The subsidy can be provided in the form of cash, grants, or through tax reductions. The subsidy is granted to make these goods and services more accessible to the consumers without causing a loss to their producers. Subsidies can be considered as the opposite of a tax or a tariff.

The goods and services which attract subsidies from the government are the ones which are essential for consumers. These include food, fuel, fertilisers, and other essential items. The government may also provide subsidies to businesses to promote manufacturing in an economy.

Government programmes that can be considered as subsidies?

There are three broad categories, under which governments may transfer funds to households and businesses. These include:

How do subsidies work?

Subsidies are offered to businesses to increase the number of goods and services produced in the economy. As production costs are lowered for the firms through the subsidies, they start to produce more.

Subsidies shift the supply curves of a firm to the right, which decreases prices and increases the quantity produced in the economy. Thus, leading to an overall increase in the welfare of the economy.

A subsidy shifts the supply curve, as shown below: 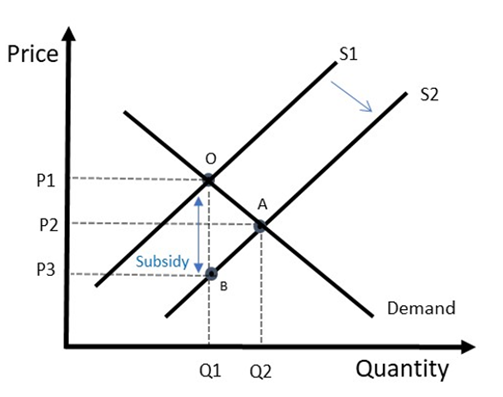 Here, the subsidy shifts the supply curve from S1 to S2. The government offered a subsidy equal to (P1-P3). The price for the consumer is P3, while the revenue received by the producer is P1. Therefore, the intermediate cost is paid by the government.

Typically, such a cost to the government can go up to millions of dollars. Thus, the government might have to borrow or tax the public to fund these subsidies.

Why are subsidies a topic of heavy discussion?

It is argued that subsidies are sometimes unable to reach the target groups as other groups exploit them. For example, subsidies offered to lower income groups may get utilised by the higher income groups under false claims. Thus, it is possible that the intended beneficiary and the actual beneficiary do not coincide. This leads to a wastage of government resources and causes an improper allocation of government benefits.

To solve this, governments must launch subsidy programs with a highly detailed set of rules determining the target group. This would ensure that no outsider is able to take advantage of these government subsidies.

Another negative aspect associated with subsidies is the fact that it helps corrupt the political process. Companies turn to government to seek their help to curb competition; in turn, businesses promise them benefits after their political careers are over.

Firms might also get used to the subsidies and in the long run might become dependent on them. This reduces their competitiveness and may make them lethargic so as they are not able to function without subsidies.

Subsidies cause market inefficiencies as they deviate the demand and supply equilibrium existing in the market.

Lastly, subsidies have become a political tool in the modern world. Governments conveniently use subsidies as a tool to rope in votes during elections. However, these may be temporary subsidies or subsidies that are followed by heavy taxation. Thus, they do not serve their intended benefits.

How effective are subsidies?

The effectiveness of subsidies depends on the price elasticity of demand. As demand becomes more inelastic, the consumers gain more benefits from the subsidy. The gains to consumers are the highest when the demand is perfectly inelastic.

Effectiveness can also be improved by formulating subsidy policies that are well targeted and can reach the intended group of people.

Why UK’s net zero plan is still work in progress

CWR, AFC, AMTE: Should you invest in these EV-related stocks now?