What is Quasi-Public Corporation?

Quasi-Public Corporation, also termed as a Public Service Corporations, is a privately held company that is backed by the government or an affiliated agency to play a specific role or carry out some specific services. These corporations include oil and gas, telegraph and telephone, irrigation and electric light, and have greater flexibility and low restrictions as compared to ordinary private businesses. Quasi Corporations receive some form of partial funding in exchange of their services, and they prioritize government mandate over creating profits. 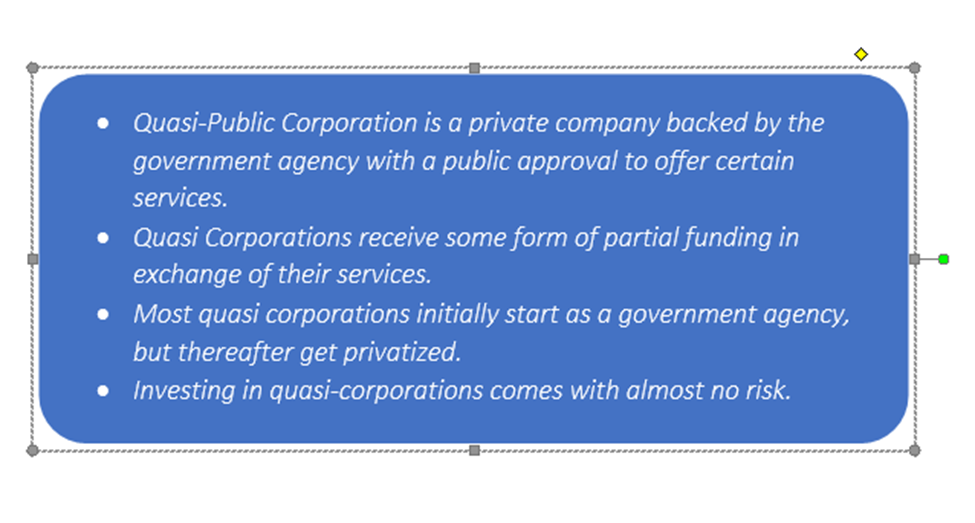 The quasi corporations are established to support government agency in enhancing the public purpose and are partially funded by government, same as a public-purpose corporation, but acts as a private company. These corporations may consist of nationalized businesses, industrial and commercial character and businesses with majority public shareholding.

Some consider quasi corporations as political policy tools as they may operate with low restrictions and greater cost-effectiveness than regular government institutions, but there employees are not consider as government workers, including the board of directors and officers.

The government agency usually finances the quasi-public corporations for its operations and for persistent losses cause by lack of capital, sales on goods and oversight by the board of directors or reduction in the price of shares.

Some private companies may also become quasi corporation if the government agency offers funding and promote public activities such as promoting education to all. As the government authorities would have to go through extra steps to finance private businesses, there will be less administrative duties on the part of both parties.

These corporations received funding from government as subsidies to compensate on losses incurred by charging prices that are lower than the average costs of productions and these funding are considered as subsidies on products.

Sallie Mae was founded to offer student loan and was initially established as a government entity, then converted into quasi public corporation. The Communications Satellite Corporations (COMSAT) was established to enhance space development and is supported by the US Congress. Fannie Mae, which is also known as the Federal National Mortgage Association, is engaged in an independent corporation and operates under a congressional charter and provides its services in housing sector.

The quasi-public corporations may get list on the stock exchange and offer investors to gain low risk stocks with value and profit generation and provide exposure to help government agency in public development projects. The operations of the corporations contribute to the welfare of general public.

Is Lithium Really The Planet’s Saviour?

Boxabl stock price: Here's what the 'housing stock' will cost

OTEX to NVEI: Should you buy these Canadian technology stocks?