The sellers in an imperfect market have the liberty to influence prices and are thus price makers. The sellers in this market are often protected by barriers to entry.

What are the types of imperfect markets? 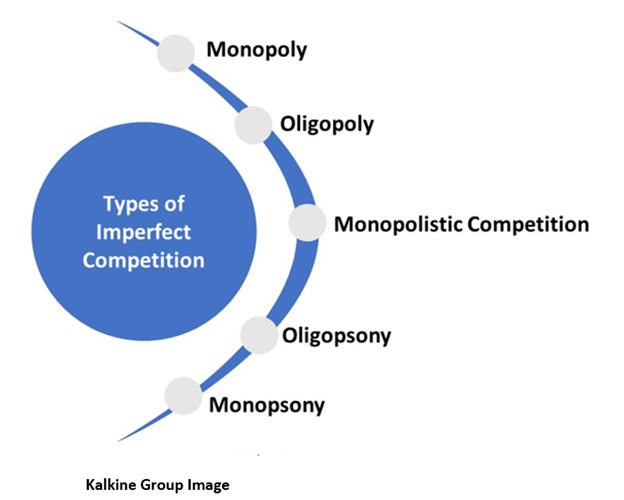 Imperfect competition can be observed in various forms, including:

Besides, there are many barriers to entry of new firms. Thus, the firm continues to hold its monopoly position. Public utilities are generally a monopoly set up as they have a single provider with no substitutes. Since these are government regulated, the prices are not too high to crowd out certain sections of individuals.

Thus, there exists a high level of interdependency between firms. This can also lead to firms coordinating in some instances to obtain higher profits. This is most frequently seen in the form of cartels.

What are the characteristics of imperfect competition?

The following characteristics define a market with imperfect competition:

However, in a monopoly there is only one firm and, in an oligopoly, firms are highly interdependent.

These variations in the products may come because of the differences in the quality of the product across sellers. For instance, ice creams are offered by different companies selling dairy. Thus, consumers may prefer one brand over the other for their quality or for their range of flavours. However, the product itself serves the same purpose irrespective of which company it belongs to.

However, this is not the same for all types of imperfect markets. For instance, in monopoly there are barriers to entry and exit.

How did the theory of imperfect vs perfect competition come to light?

The theory of perfect competition was given by French mathematician Augustin Cournot in 1838. The theory helped theorise the economic relationships that existed in the market.

The theory, however, was too ideal a representation to fit into the real-world scenario. This model of perfect competition was a hypothetical one and was an oversimplification of real-world scenarios. It did not include other aspects like barriers to entry, imperfect knowledge in markets and heterogeneity of products.

Importantly, the theory of imperfect competition was most prominently popularised by Joan Robinson in 1983 in her book “The Economics of Imperfect Competition”. In this book, Robinson gave the model where each firm enjoyed some monopoly power. This was later extended into the idea of monopolistic competition.

ASX falls over 1% ahead of Federal Budget 2021; tech stocks drag

ASX slips below 7100-mark ahead of Budget; Redbubble, PointsBet down 7%

How is Australia tackling the climate change crisis?

A Glance at 5 Healthcare Penny Stocks

Stocks that made major moves on the ASX

Will These Three Healthcare Stocks Double In 2021?