What is an imperfect market?

Joan Robinson in England and E.H. Chamberlin in America are considered the proponents of the concept of imperfect competition or imperfect market. Imperfect market structure is a part of microeconomics in which companies sell different products and services. In the real world, most companies belong to imperfect markets with pricing power and high barriers to entry, resulting in higher profit margins as each company tries to differentiate their product.

Imperfect competition is a market system in which sellers or buyers have pricing power, preventing the market from functioning under perfect competition. As a result, market players are frequently able to use their authority, raise prices, and manipulate the market to obtain more significant profits because they have market power.

What are the various forms of the imperfect market? 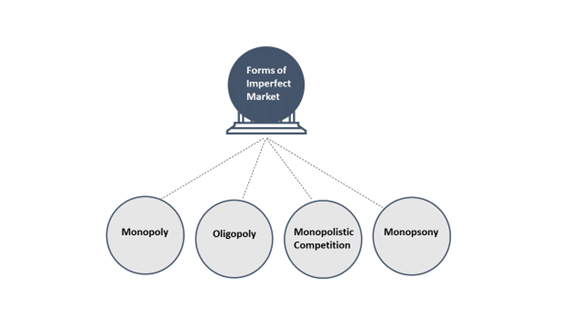 A monopoly is defined by a single vendor and a large number of purchasers. Furthermore, because there is only one producer or seller in a monopoly, there is no distinction between the firm and the industry. As a result, the demand curve of the firm is the demand curve of the industry. In a monopoly, there is no close substitute for the monopolist's product as is in the case of the railways in India where the single seller is the government. If there is a near equivalent substitute, the monopoly cannot exist. A monopoly can only exist if the product the monopolist produces has zero cross-elasticity. As a result, the monopolist has the freedom to set his/ her price and refuse to sell below that amount. Even if the monopolist corporation is making above-average profits, new businesses face numerous obstacles when attempting to enter the field due to factors such as legal restrictions, technology, or a naturally occurring chemical that others cannot obtain. A monopolistic corporation sets prices rather than accepts them. As a result, a monopolist can raise or lower the price.

There are just a few large enterprises in an oligopoly. The actual number of businesses is unknown. Each company contributes a considerable amount to the entire output. 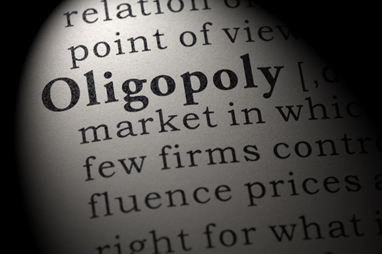 Different enterprises compete fiercely, and each one tries to outsmart the other by manipulating both prices and output volume. A change in output or pricing by one firm elicits a response from other market participants. They adhere to a price-fixing policy. Price rigidity is a scenario in which prices tend to remain constant despite changes in demand and supply. Firms compete with each other through different means such as advertising, superior customer service, etc. Patents, the need for a considerable amount of capital, control over critical raw materials, and other factors restrict new businesses from entering the market.

There are many sellers with a tiny portion of the market in a market with monopolistic competition. In monopolistic competition, all brands strive to differentiate their products to gain a competitive advantage over the competitors- this guarantees that the brand's product does not have a perfect equivalent. As a result, the producer can increase the product's price without fear of losing all of its customers to competing brands. However, in such a market, all brands are close equivalents for each other, even if they are not perfect alternatives. As a result, the vendor may lose some clients to his competitors. Firms have complete freedom to enter and quit the market. Sellers compete on factors other than price in monopolistic competition. Aggressive promotion, product development, improved distribution, and after-sale services are just a few of these aspects. Sellers do not reduce the price of their products, but they do suffer hefty fees for product advertising. Some firms may be forced out of the market if they engage in price wars.

Detergents have many close substitutes 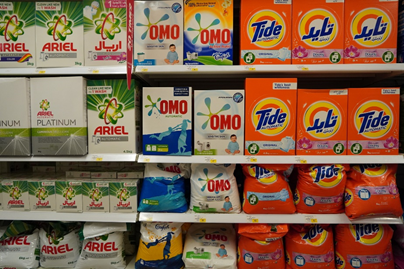 When a company possesses market power in production factors, it is called a monopsony (e.g. labour). There is only one buyer and many sellers in a monopsony. It usually refers to a monopsony employer — one who has a monopoly on the hiring of employees. Monopsony is akin to monopoly, where one vendor sells to a large number of purchasers. Monopsony power emerges when a single buyer or group of purchasers can influence the prices they pay to suppliers or control other aspects of their relationship.

What factors affect an imperfect market?

In the case of imperfect forms of market, all the sellers do not have the same market power or the power to control prices. For example, in the case of a monopoly market, the seller has absolute power, while in the case of monopolistic competition, the power is highly limited for individual sellers.

The market power and the ability to impact prices and supply of a good is dependent on factors like the number of substitutes available and the elasticity of demand for the good. The higher the number of substitutes, the more are the choices available for the consumers. Each product has somewhat (or entirely) varied features and traits, allowing purchasers to choose between products from different companies. They serve as close alternatives rather than exact replacements. As a result, if one seller does not meet the requirements of another seller, they can choose another one to meet the same demand. For such commodities, the price elasticity of demand is highly elastic due to the availability of choice for consumers.

In the market, there is information asymmetry. When it comes to making judgments and transactions, asymmetric information indicates that one side has more or better information than the other. The inaccuracy of the information creates a power imbalance. Asymmetric information, or information that is different between two parties, causes adverse selection, moral hazards, and market failure. Few businesses are more knowledgeable than their customers or competitors and can use it to their benefit.

Producers operate as price makers because they have pricing power. Therefore, they can charge a higher price than the marginal cost. The greater the disparity between the two, the greater their profit.