What is an oligopoly?

Industries evolve over time and pass through several competition patterns. Competition in an industry is the effect of behaviour of firms. Fiscal policies also have an influence on the competition with industries. Policy intervention is implemented through a competition commission/regulator.

Oligopoly is a term used to define an industry, a specific market, or a company. It is a market dominated by a few players and can have many small players. This type of competition in a market is known as oligopolistic competition. A few enterprises dominate the market, often selling similar goods and services.

Since only a few firms dominate an oligopoly market, competition is muted from smaller payers. Firms in oligopoly gain significant market power, thus preventing other small players from flourishing or entering the market.

Firms often replicate the behaviour of each other, and also recognise that action will likely provoke a similar response from other firms. In this way, firms also understand interdependence among each other in the oligopoly market.

What are the characteristics of an oligopoly? 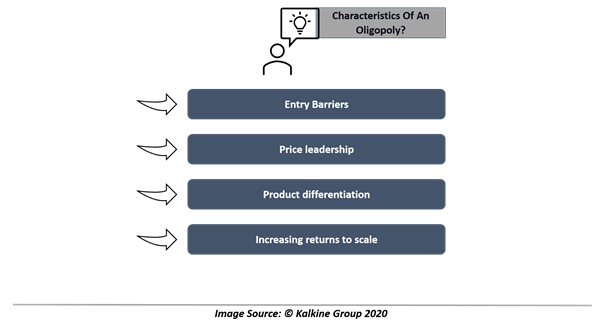 It is an important source of oligopoly. Barriers to entry make it difficult for firms to enter the market. It essentially refers to hindrances and restrictions an aspiring firm faces when entering new markets. Some markets have high barriers to entry, like an oligopoly, while some have very low barriers.

Firms can have barriers in the form of licences, patents, intellectual property, or established economies of scale. Oligopoly could also exist in professions, which require licensing and specific educational qualifications.

Further, barriers could be in the form of the capability of firms with respect to developing intellectual property, patents, access to complex technology and capital. Government policies could be a source of barriers, especially when licenses for operating in a market are granted to a limited number of players.

In many economies, entry barriers have given birth to oligopolies in many markets and industries. In the past 50 years, the increasing level of globalisation has also intensified competition across the industries.

Firms in an oligopoly market are also dependent on each other, and this interdependency is also defined as an oligopoly. The competition remains so intense that changes in price level and output are replicated by firms in the market.

Collusion is a term used in competition and occurs when two competing firms join hands. This could result in restrictive trade practices, voluntary cut in volumes and price hikes. It remains illegal across most of the economies, and competition commissions keep a check on such practices.

Price leadership may lead to tacit collusion in an oligopoly market, but it could be difficult to identify. The leader firms choose the prices, and other firms follow by raising or lowering prices to match. When other firms respond to price changes, it does not necessarily mean tacit collusion.

Competition laws direct to firms to not explicitly communicate prices, therefore making it illegal. In an oligopoly, firms may agree tacitly and respond to the price or output changes by the price leader.

Product differentiation is a procedure of developing goods or services that are distinguished from others available in the market. It is a source of higher demand for the product from the target market and includes differentiating products from substitutes as well as their own products.

Although the differentiation may be small from a producer’s perspective, the buyers in the target market could have different perceptions for available products. This distinguishing feature may allow the producer firm to charge a premium price.

Differences in goods and services can exist through differences in quality, functional features or designs, sales promotion activity, or availability. The motive of achieving product differentiation is to develop a position, which customers perceive as unique.

However, when a firm successfully implements product differentiation strategy, it allows to gain further market power and dominate some parts of the industry.

Put another way, when a firm is operating at increasing returns to scale, doubling the input levels would result in more than doubling output levels. This simply implies that larger firms have lower average costs compared to smaller firms.

In this way, larger firms can benefit from efficiency gains at a higher level of production. Oligopolies and monopolies typically exist in industries where increasing returns to scale are achieved at higher output levels.

When a new firm seeks to enter the oligopoly market, the market penetration would be smaller, and it would have high average costs of production. It is because most of the market share is dominated by a few firms operating large outputs, thus more cost-efficient production.

What are the disadvantages of oligopoly?

What is an oligopoly?