Economists and policymakers have often acknowledged the fact that of all the aspects of social and economic imbalances, nothing is as overwhelming as unemployment!

Unemployment is a situation wherein individuals are employable and pursuing a job but are unable to attain it. More concretely put, unemployment is the state where working age people do not have a job and have actively looked for work in the past few weeks. Besides, they are currently available to take up a job role and require subsistence. It is often interchangeably used with joblessness.

It is important to note that unemployment occurs only when people are willing to work but are unable to do so, owing to a variety of reasons. For instance, a mother who quits her job in order to take care of her child is not ‘unemployed’ per say, as she is not actively seeking employment and her present role is at her discretion.

Cyclical in nature, unemployment can be both long term and short term. Besides, it is a key macroeconomic indicator, signalling the inability of workers to readily obtain gainful work and consequently contribute to the productive output of the economy.

How Do We Define Unemployment Rate?

The percentage of labour force that is jobless in an economy constitutes the unemployment rate. Taking cues from macroeconomic indicators, unemployment rate is referred to as a lagging indicator, that rises or fall in the wake of changing economic conditions, but with a delayed reaction, as outlined below:

The unemployment rate provides insights into the economy’s spare capacity and unused resources. It is reported by a dedicated Government authority at fixed intervals. The methodology for calculating it often varies among countries since different definitions of employment and unemployment, as well as different data sources, are used.

A simple formula to calculate unemployment rate can be considered as-

What Are the Types of Unemployment?

British Historian Thomas Carlyle rightly quoted that “a man willing to work, and unable to find work, is perhaps the saddest sight that fortune's inequality exhibits under this sun.”

To date, this statement stands true. On this note, let us cast an eye on the four key types of unemployment- 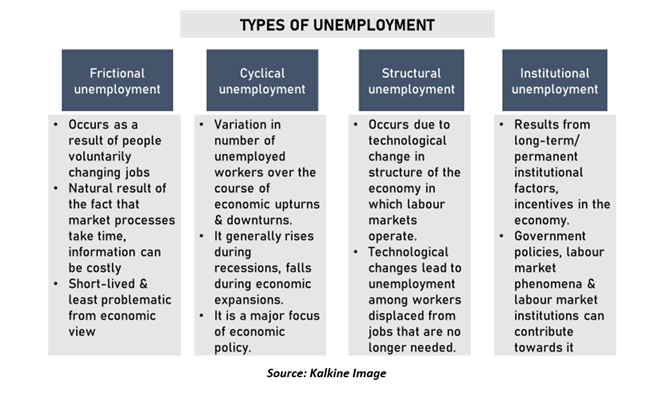 Another type that should be acknowledged here is voluntary unemployment wherein a worker decides to leave a job because it is no longer financially satisfying at the given wage rate. For instance, a worker whose take-home pay is less than the cost of living, might voluntarily chose to leave a job.

Unemployment is caused by several reasons that come from both the demand side (employer) as well as the supply side (worker). The demand side factors include high interest rates, global recession, financial crisis etc, while Supply side determinants include frictional unemployment and structural employment.

Another scenario to be considered is when workers relocate and are unemployed until they find a position in the new place. A primary cause of youth unemployment is believed to be lack of in-demand and advanced skills, experience and qualifications which restrict them from joining the workforce. Low consumer demand and companies losing profits also play an important role in driving the labour force scenario.

What are the Effects of Unemployment?

When unemployment rates are high and steady, there are negative impacts on the long-run economic growth, posing serious social and economic issues. Economists opine that when unemployment strikes hard and especially is prolonged, a downward spiral is bound to impact the economy, possibly raising the chances of depression.

Lower purchasing power, dip in consumer spending, squeezed profits for businesses, budget cuts and workforce reductions are likely to be a common phenomenon. 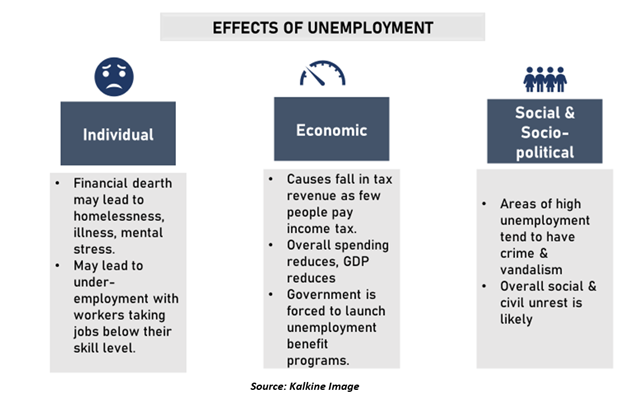 What are the Challenges Faced by Unemployed Workers?

Since employment is a prime source of identity and an organisational frame for sustaining daily life in almost every culture across the world, unemployed individuals have been seen to suffer psychological and social distress. So much so, unemployment is often associated with negative health consequences and may propel stress-related illnesses, a lowered self-esteem, uncertainty about the future, financial instability, and loss of vocational identity.

However, looking at the bright side, unemployed phase can be looked upon as the time to network, build on skills, learn new technology and introspect career path. There are a number of online networking sites that can help one get back on their feet. Besides, vocational courses, skill-development programs and tech enhancement courses can be considered.

How Can Unemployment Be Controlled?

Now that we understand the cause and consequences of this social and economic upheaval, let us understand if unemployment can be controlled. A simple answer to the question is- YES! The question that arises next it- HOW? Read On!

Besides, fiscal policy is another effective tool used by the Government to control unemployment and create jobs by increasing spending on government infrastructural projects and welfare programs. The policy may also offer people with more income to spend by cutting taxes.

Besides, opportunities can be created to encourage unemployed workforce to pursue higher-level degree/ advanced training programs for in-demand occupation.

The simple answer to the above question is- YES.

Undoubtedly, unemployment is one of the key economic indicators that describes the labour market conditions in an economy. The consensus believes that the unemployment rate in an expanding economy gradually decreases. On the flip side, the rate increases significantly if an economy enters recession.

However, one should note that to analyse and understand the true stance of an economy, many forces need to be ascertained, for instance- political stability, exchange rate, interest rate, inflation, trade balance, human capital, infrastructure, resource availability, standard of living, and technological footprint.

HAS, STEM, RWA: Should you focus on these recruitment stocks?

US jobs data: Stocks to watch as unemployment rate declines to 3.5%

It is defined as the fee that may be charged to a potential debtor for getting a loan. For all category of loans, the loan application fee is necessary and is m......
[ Read More ]