The term stagnated economy refers to an economy that sees little or no growth in its GDP. High levels of unemployment are triggered by the inflation prevalent in the economy. These economic factors keep aggravating each other, thereby worsening the economic situation of the economy.

Usually, in the scenario of stagflation, it is possible that any fiscal stimulus or monetary policy implemented to make the economic situation better could rather worsen the situation.

How is stagflation different from inflation?

Stagflation is a much more severe case of an economy with inflated prices. Under stagflation, prices are at an unmanageable level as well as the economic growth is not contributing in any way to reduce the inflation rates.

As people lose jobs due to a sinking economy, they also face the pressure of rising prices. This means that the amount of money held by them is constantly losing its value due to inflation. Therefore, people are not able to consume goods due to the lack of jobs and recession. In addition, they are also unable to utilise the money effectively in their hands as its value is gradually falling. 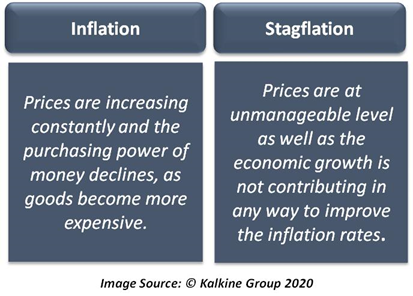 Normally, in a low growth situation, the central bank can provide stimulus to the economy by decreasing interest rates and encouraging public spending. However, under stagflation, policies may not give the expected results.

How did the concept of stagflation come to light?

The concept of stagflation came to light after the 1970s. It was believed that stagflation was not an achievable scenario as the increase in prices were thought to be a by-product of economic growth. Under the concept of the Phillips curve, an increase in unemployment is offset by a decrease in inflation. Thus, both move in opposite direction to balance out each other. Therefore, inflation in the economy was thought to be a normal sign.

The recession of 1973-1975 was termed as stagflation and that is when the term got recognition. There were high rates of unemployment during this time and inflation rates tripled across the economies. There were no visible adjustments in either inflation or unemployment.

Why did the stagflation of 1970s occur?

There are several factors at play that led to the stagflation of 1970s. 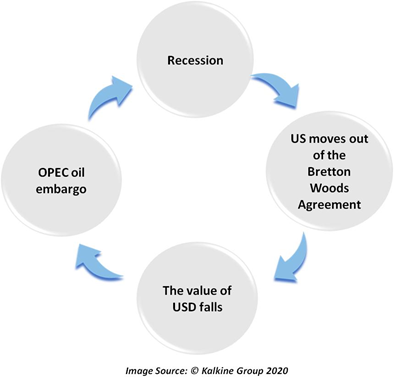 One of the major factors at play was the OPEC oil embargo decision. OPEC decided to not supply oil to the US after the then President Richard Nixon decided to remove the US off the gold standard.

This meant that countries could not redeem US dollars in their foreign exchange reserves for gold. With this decision the US moved out of the Bretton Woods Agreement.

Can stagflation be prevented?

Past experiences have pointed towards the possibility of policy intervention worsening the economic scenario under stagflation.

Monetary policy is one of the strongest tools available to a central bank. However, increasing the supply of money can have adverse effects rather than benefits for an economy. This is exactly what was observed in 1970s. The central bank introduced a lot of money into the economy to increase the demand. However, this influx of liquidity led to higher inflation which ultimately led to an increase in unemployment.

It is a known fact that printing of currency and increased money supply lead to inflation. Thus, the impacts of the Fed’s policies in 1970s were effectively the same as the effects of seigniorage or printing of more money.

Thus, the primary method to combat stagflation would be to avoid allowing too much liquidity seeping into the system. The central bank needs to be alert under the scenario of a recession when stagflation can set in if the right policies are not implemented. The most important lesson from the previous examples is that central banks need to pull money out of circulation when they fear a prolonged price rise.

AAPL to UNH: Can these five blue-chip stocks beat inflation?