What is Keynesian economics?

The theory was given by John Maynard Keynes in the 1930s and published in Keynes’ “General Theory of Employment, Interest and Money” in 1936. The Keynesian theory stated that government spending was an essential factor in increasing demand and maintaining full employment.

What are the theories under Keynesian economics? 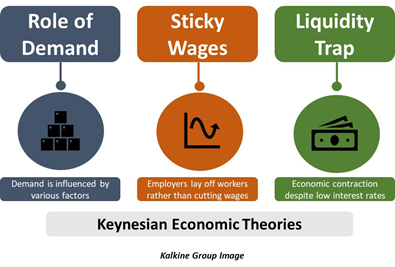 How is Keynesian economics different from Classical economics?

What are the policy measures advocated by Keynesian economics?

According to Keynes, adopting a countercyclical approach can help economies stabilise. This means that governments must move in a direction opposite to the business cycles. The theory also states that governments should recover from economic downturns in the short run itself, instead of waiting for the economy to recover over time.

Keynes wrote the famous line, “In the long run, we are all dead”. The short run knowledge of the economy would be far better than the long run prediction made by any government. Thus, it makes sense for governments to focus on short run policies and maintain short run equilibrium.

What have been the criticisms of Keynesian economics?

The initial stages of Keynesian economics propagated that monetary policy was ineffective and did not play any role in boosting economic growth. However, the positive effects of monetary policy are well established and have been integrated into the new Keynesian framework.

Another criticism is that the advantage of the fiscal benefits to the GDP cannot be measured. Thus, it becomes difficult to fine-tune the fiscal policy to suit the economic scenario better. Also, the Keynesian belief of increased spending leading to economic growth may lead to the government investing in projects with a vested interest. It could also lead to increased corruption in the economy.

The theory of rational expectations suggests that people understand that tax cuts are only temporary. Thus, they prefer to save up the income left behind to pay for future increases in taxes. This is the Ricardian Equivalence theory. Thus, fiscal policy may be rendered ineffective due to this.

Which stocks to explore amid record-low consumer confidence?