What was the Great Recession?

The Great Recession was a severe decline in economic activity in the United States in 2007–08. It is widely regarded as the worst decline ever since the Great Depression. It encompasses both the U.S. recession, which started in late 2007 and lasted until mid-2009 and the global recession in 2009.

Major factors that contributed to the Great Recession:-

What is the Great Recession's significance?

According to the International Monetary Fund (IMF), a "global recession" is described as a drop in real per-capita global GDP, as evidenced by other macroeconomic factors such as factory output, investment, oil demand, and layoffs.

The Great Recession officially began in 2007 and continued until 2009, following the collapse of the US housing bubble. During this time, the economy shrank by 4.3%, and unemployment reached 10%. The economic recession got intensified by the financial meltdown, which resulted in a significant shortage of liquidity in global markets.

The global financial crisis, which inflicted turmoil in the world financial markets and even the bank and real estate sectors, resulted in a spike in home mortgage foreclosures around the world, costing millions of people their properties, employment, and wealth.

Many countries recorded some of the highest unemployment rates, lower GDP, and economic turmoil since World War II during the Great Recession.

What is the root cause behind the Great Recession?

In 2007, the stock market reached new highs.  However, the Dow Jones Industrial Average (DOW) lost more than half of its value by the next year, resulting in an unsustainable stock market that wiped out lump sum amount of people from the stock market in the United States.

As a measure, the Fed, for the first time, cut the national target interest rate from around 5.25 % in 2007 to 0% to tackle the sharp drop in spending and lending to induce liquidity circulation in the market.

The "subprime mortgage crisis" has been attributed to the Great Recession. Subprime mortgages are a form of home loan available to people with poor credit. Their mortgages have a high-risk rating.

The real estate market was thriving in the mid-2000s, so financial institutions and banks were issuing mortgages to high-risk borrowers to fund risky securities and bonds.

There was a lot of expectation that house prices would continue to rise. Risky mortgage packages were sold to banks all over the world by US mortgage companies.

Mortgage default rates began to spike for both homeowners and lenders because repayment or selling homes at the expensive rate was no longer a feasible choice for paying off their mortgages.

American banks lost money, however, other banks around the world later discovered that the secure mortgage packages they purchased were simply useless and saw a significant drop in liquidity and asset value. It also developed distrust among banks, as they refused to lend to one another.

The fall of the giants

Bear Stearns, the investment banking behemoth, collapsed in March 2008, blaming its financial woes on subprime mortgage investments, and its assets were purchased at a discount by JP Morgan Chase. Lehman Brothers filed for bankruptcy for the same reasons, making it the largest bankruptcy filing in US history.

What are the ramifications of the Great Recession?

The Great Recession was a period of economic depression marked by low and negative growth, rising unemployment, and fiscal austerity.

As a consequence, house prices and stock portfolios collapsed, causing millions of people to lose their jobs. Unemployment was estimated to be about 30 million, more than doubling the rate of long-term unemployment to a new record.

Here's a small list of the financial damage caused by the Great Recession. 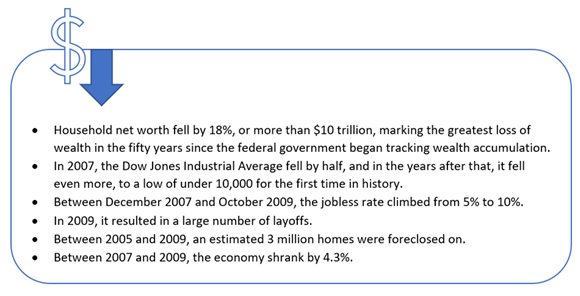 What steps were taken to get the Great Recession under control?

In October 2008, President George W. Bush established the Troubled Asset Relief Program (TARP) in place to avert the financial system from crashing completely, with the aim of distributing $700 billion in funds to purchasing struggling companies' properties to hold them afloat.

In the same year, Government enacted the Economic Stimulus Act into law. The legislation provided citizens with rebates ranging from $600 to $1,200, as well as reduced taxes and higher loan caps for federal home loan programmes such as Fannie Mae and Freddie Mac.

In 2009, President Barack Obama gave his nod for the American Recovery and Reinvestment Act (ARRA), a $787 billion stimulus package that included foreclosure relief, tax reductions, infrastructure funding, and other measures.

What should you know before investing in tech stocks?

Why are the 5 NZX stock stories trending today?

Are penny stock investments worth the risk?

Why are these five penny stocks generating buzz on ASX today?

Planning to invest in stock markets: Here’s how to pick some good IPOs

How do I invest in NASDAQ?

ASX-listed Stocks that made news today!