What is business cycle?

A business cycle refers to the sequence of expansion and contraction in an economy. Commonly referred to as “trade cycle” or “economic cycle”, Gross Domestic Product of a country is the key indicator used to assess the cycle.

While all capitalist economies experience periods of expansion and contraction, the timing varies from country to country based on factors specific to the economy. Moreover, with the increasing interlinking amongst economies due to globalization, more and more countries are now getting impacted at the same time. 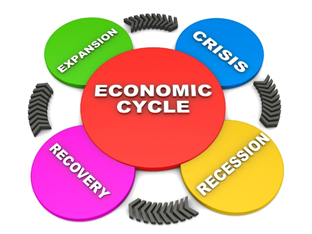 What are the phases of a business cycle?

In the case of a business cycle, it's important to remember that no cycle is perfectly regular with uniform frequency and amplitude, which means that the time it takes to move from one peak level of output to the next is always the same, and the level of output and employment varies in the same proportion between the upper and lower turning points.

There are four phases to a typical cycle:

It begins when a period of depression has lasted for some time, and the revival phase, also known as the lower turning point, begins. Exogenous or endogenous forces could be the stimulating factors for the turn in the cycle. For example, a technology change could result in a situation where the incumbent gadgets and the related accessories must be replaced. As a result, demand rises. Investments and employment rise in response to the growing demand. Initially there is excess capacity in the economy. 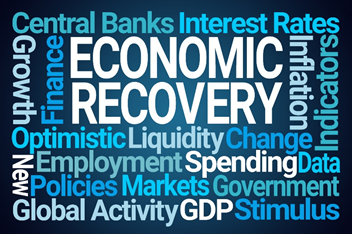 However, as time passes, the output becomes less flexible, bottlenecks emerge as expenses rise, deliveries become more problematic, and factories may need to be expanded. Prices rise in these circumstances. Profits are increasing. Expectations in the workplace are rising—optimism triumphs. The economy needs more investments and makes moves to encourage investors. In turn there in a higher demand for bank loans and thus there is expansion of credit. Expansion of aggregate demand and increase in general price level follows this situation and the economy enters into the phase of prosperity.

Demand, output, employment, and income are all high during the prosperity era. As a result, these forces have the power of raising prices. Wages, salaries, interest rates, rents, and taxes, on the other hand, do not rise in lockstep with price increases. The difference between prices and costs raises the profit margin. A sudden spike in stock market values is typically caused by an increase in profit and the probability of it continuing. Improved expectations boost the value of all financial instruments, including bonds. The notable change is in stocks, reflecting capitalized values of projected earnings in an inflated form of expanding firm profits. Waves of optimism have swept through the economy. Increased profit expectations encourage more investment, which is aided by the availability of bank financing.

The investments using bank financing is predominantly for purchasing fixed capital. As a result, they cause a significant increase in economic activity by increasing demand for consumer products and raising prices all the more. This expansionary process continue till it reaches the peak where production is massive. Such a phase is also called boom.

Then, the economy may reach its peak of prosperity, resulting in crossing full employment levels and price inflation. It is a sign of the end of a period of prosperity and the start of a recession. The phase is marked by scarcity of labor, raw materials, and other resources, increasing costs relative to prices. There is also a rise in interest rates due to capital shortages. Stocks pile up because consumption fails to match the level of consumption.

When there is a short-term decline from a "high," a recession begins. It marks the point in time when the forces of contraction eventually triumph over the forces of expansion. As a result, the stock market is liquidating, the financial system is stressed, some bank loans are being liquidated, and prices are starting to fall.

As a result, profit margins begin to erode as expenses begin to outpace prices. Some businesses close their doors. Others cut production and try to sell off their stockpiles. As a result, investment, employment, earnings, and demand are all declining. This is a cumulative process.

There are two types of recessions: moderate and severe. The latter could result in a panic or crisis resulting from a sudden explosive situation emerging from the banking system or the stock exchange. A stunning and unexpected failure could trigger this breakdown. For example, a company, a bank, or a corporation declares that it will be unable to pay its debts. This news hurts other enterprises and banks when the economy is showing signals of crisis; additionally, it triggers a wave of fear that culminates in a general run on financial institutions.

Depression is a situation wherein there is a fall in income, output, employment and aggregate demand in the economy. The drop in bank deposits is a result of the general downturn in economic activity. Because the business community is unwilling to borrow, credit expansion comes to a halt. The bank rate has dropped significantly. The fundamental basis of price declines is a decrease in active purchasing power. Despite the widespread drop in output, this is how depression is defined. Depression is defined by mass unemployment, a general drop in prices, profits, wages, interest rates, consumption, expenditure, investment, bank deposits, loans, and the closing of industries.

Depression is defined by mass unemployment, a general drop in prices, profits, wages, interest rates, consumption, expenditure, investment, bank deposits and loans, the closure of factories, and a halt in constructing all forms of capital goods, buildings, and other structures. The economy is in a trough as a result of these forces, which are cumulative and self-reinforcing.

The trough or depression may be brief, or it may persist for a long time at the bottom. Eventually this phase ends and economy begins to see improvement.  As a result, the cycle is complete.

Because of the numerous causes and events that produce cyclical oscillations, determining the behavior of a business cycle is challenging. Exogenous causes are attributed by some, whereas others attribute endogenous factors.

Some economists divide business cycle theories into monetary and non-monetary categories, while others divide them into real, psychological, monetary, and spending, saving, and investment-related categories.

LIC, ATM, SML- Why are these dairy stocks grabbing headlines?