The Governor of Reserve Bank of Australia, Mr Philip Lowe addressed the Anika Foundation Luncheon through a speech titled âInflation Targeting and Economic Welfareâ on 25 July 2019. He defended the bank's inflation targeting regime and informed that he might ease monetary policy further if needed.

Inflation Targeting: According to Mr Lowe, the persistent existence of spare capacity in different parts of the global economy, the current monetary frameworks and structural factors related to globalisation and technology have led to the lower rate of inflation in the global economy.

Mr Lowe believes that it is very likely that the countries operating close to full capacity have inflation near to the target. However, there is an existence of spare capacity in Australia, and the evidence does not support the idea that a transition in Australiaâs inflation target would result in better economic outcomes than the countryâs existing flexible inflation target.

Before the Governorâs speech, speculations were doing rounds that he might reduce the current inflation target, which is higher relative to other developed economies. However, Mr Lowe stated in the speech that if the banks would have to set a lower inflation target, it might turn out to be beneficial for the Australian economy in the short run, but it is not a good approach to build long-term credibility.

The Governor appreciated Australia's monetary policy framework and the flexible inflation-targeting regime that has helped Australia cope with large economic shocks and remain a strong and stable Australian economy in the last 30 years.

Monetary Policy: Mr Lowe highlighted in his speech that Australia has witnessed a stronger than expected growth in employment since 2017. The rising demand for labour has been balanced by an increased labour supply. The balance between the two has contributed to modest wage outcomes in the recent years, resulting in low inflation. However, the flexibility in the labour supply is an added advantage for the country as the employment growth can be more robust in Australia with no fear of overheating.

The Governor informed that the recent reductions in the cash rate were made in support of these propositions. Recently, the RBA lowered the interest rates by 25 basis points each in June and July, taking the level of interest rates to 1 per cent. Mr Lowe emphasized that these deductions will facilitate the demand in the Australian economy, and if the demand growth would be insufficient, the bank is ready to offer additional support by reducing the interest rates further.

Mr Lowe expects that there will be an extended period of low interest rates in the Australian economy and the central bank is strongly committed to ensure that the average rate of inflation stands between 2 per cent and 3 per cent. He made it clear that a rise in interest rates is highly unlikely until the bank becomes confident that the inflation will recover to the middle of the target range.

The central bank lowered the cash rate to 1 per cent in July this year in order to provide greater confidence that inflation will be in harmony with the medium-term target, and support employment growth. The bank informed that the consumption growth, declining bank funding costs, long-term government bond yields, and a below-trend economic growth of 1.8 per cent observed by the country over the year to the March quarter induced it to ease the monetary policy.

Besides the above-cited factors, the existence of spare capacity in the labour market indicated by a recent increase in the unemployment rate to 5.2 per cent has been a contributing factor to the . 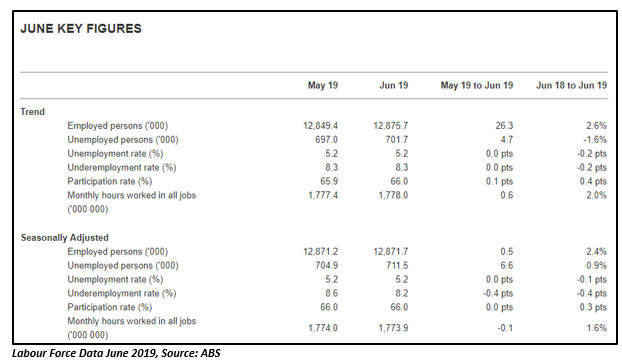 The overall wage growth has remained low in Australia despite a strong growth in employment over the past year. The RBA expects a further increase in wages growth and believes that the Australian economy can withstand reduced rates of underemployment and unemployment.

The decision to deduct interest rates was driven by the persistent downside risks to the Australian economy due to weaker inflation. The Australian economy experienced a steady headline consumer price index in the March 2019 quarter that stimulated the anticipations of the rate cut by RBA.

Mr Lowe mentioned earlier that inflation is expected to rise in the June quarter with an improvement in petrol prices.

The persistent fall in housing prices has remained a topic of concern for the central bank over the last few months and was an additional contributory factor to the rate cut. As per the Australian Bureau of Statistics, Australia saw a decline in property prices across all the eight capital cities during the March 2019 quarter with the larger property markets (Sydney and Melbourne) observing the greatest falls.

One of the big four banks of Australia, Commonwealth Bank of Australia (ASX: CBA) has also claimed that the residential property market is set to recover after two years of stagnation. The bank anticipates a rise in property prices in the second half of the year, delivering returns of around 3 per cent in 2020.

The dwelling approvals have also improved in Australia in May 2019, shows the recently released figures by the ABS. The total dwellings approved in May rose 0.7 per cent in seasonally adjusted estimates, driven by a 1.2 per cent rise in private sector dwellings excluding houses. Victoria drove the national increase with a rise of 14.4 per cent.

The increase in household wealth, recently seen during March 2019 quarter, might also result in rising demand for property, giving a boost to the property sector. The household wealth rose by 0.2 per cent during the quarter to $10,242.6 billion, directed by real holding gains on financial assets.

The Australian Prudential Regulation Authority (APRA) has also proposed some changes to the mortgage lending rules that are expected to promote the mortgage purchases in the near future. The regulator has eased the stringent lending restrictions that required an application of stress test by banks and other financial institutions on the home loan customers. The prudential regulator has removed the 7 per cent buffer on home loans, enabling banks to decide their own minimum interest rate floor and use 2.5 per cent buffer for making calculations. These transitions have created an optimistic outlook over for the property market that has started showing signs of restoration.

Post the release of Mr Loweâs speech, many economists have started expecting the interest rates to fall to 0.5 per cent by February 2020. The Governorâs dovish remarks also created a fresh selling pressure on the Australian dollar, taking it to a fresh two-week low value of 0.6966 on 25 July 2019. The 10-year government bond yields also dropped to a record low value of 1.237 per cent with Mr Loweâs remarks. However, the Australian share market continued to perform strongly with S&P/ASX 200 closing at 6818 points with a rise of 0.6 per cent. The All Ordinaries Index crossed its all-time high previously closed value of 6862 points, ending the trading session at a new high of 6901.9 points om 25 July 2019.