What is meant by Disequilibrium?

Disequilibrium refers to a situation where the market forces of demand and supply are out of balance. Disequilibrium can be caused by various factors which can be external or internal. Economic forces may cause a disequilibrium that lasts for a short term. But, it can also be a long-term disequilibrium under certain circumstances.

In the situation of disequilibrium, there may be excess demand or excess supply. This means that either the demand in the market is not able to meet the supply or vice versa. Thus, there can either be a shortage in the market, or a surplus.

While, equilibrium is a state where market forces are balanced. Any changes to this state would lead to a distortion in the economy.

How does an economy move towards disequilibrium?

Equilibrium is achieved when an economy is in its natural state without any external intervention. Thus, the goods market equilibrium refers to a state where prices are stable due to the stability of demand and supply.

Therefore, disequilibrium is not a long-term state rather is a temporary disbalance in the market forces. Markets acclimate to a new state of equilibrium with relevant policies and regulation.

What are the causes of disequilibrium?

Markets may move out of equilibrium due to various external factors. However, it is also possible that markets do not always operate on full efficiency. Factors leading to disequilibrium include:

How can the situation of disequilibrium be resolved?

There are two schools of thought that can explain how economies recover from a disequilibrium. According to Keynes, a disequilibrium would not self-regulate. Keynes gave the argument that the natural rate of unemployment is always less than the full employment rate. This happens because there is always a certain degree of frictional unemployment.

Keynesian economics postulates that government intervention is necessary to come out of disequilibrium. Thus, many governments make it a practice to adopt fiscal measures and monetary expansion measures in times of an economic recession or when there are distortions in the economy.

The second approach involves classical school of thought. According to this, any distortion in the economy is self-correcting. Meaning any changes from the equilibrium level are bound to get adjusted on their own, without any external regulations. This is the theory of the invisible hand propagated by the economist Adam Smith. However, this may always be the case as certain instances of disequilibria require immediate action by the government.

How can disequilibrium be practically understood?

Consider the following diagram, where the price level P1 represents a price floor wherein the government fixes a price below which serves as the minimum selling price for the sellers. This means that the sellers need to be paid an amount that is at least equal to P1.

This price floor has led to a market distortion. At price level P1, there is an excess supply of the good. However, at this price not all consumers can purchase the good. Thus, the demand is unable to meet the supply and there is a disequilibrium. 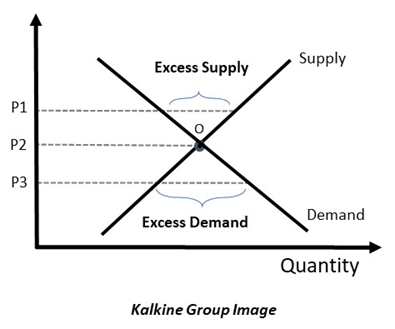 Similarly, a price ceiling P3 ensures that buyers pay maximum amount equal to P3 and not any amount beyond that. However, fixing a price ceiling creates excess demand. Thus, a disequilibrium has set in the economy.

A sudden demand shock can also lead to market disequilibrium. For instance, post a war, or during a global crisis, there might be a sudden contraction in demand. Thus, there would be an economic recession because of this. However, the supply may not adjust as immediately. Thus, there would be excess supply in the economy.

To overcome this, producers would decrease prices so that demand increases. This would lead to adjustment in demand and a new equilibrium would set in as shown in the diagram below. Here, as the Demand curve falls from D1 to D2, there is an excess supply at point B. Thus, when prices are reduced from P1 to P2, the economy moves to point A, which is the new equilibrium point. 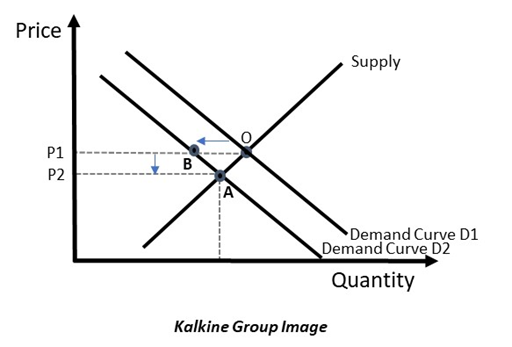