What is supply-side economics?

The term supply-side economics became famous only in mid-1970. Such a concept came up because of the condition wherein the demand-side policies failed around the time of US stagflation. Although the term is relatively recent, its roots can be found in classical economics. According to Say's law, supply creates its own demand. As per this law, supplying a good means creating demand too. When goods are produced, people earn incomes and spend the income to fulfill their demand for goods and services.

Any disequilibrium between demand and supply is auto-corrected with adjustment in prices and wages. As a result, an economy always tends to move towards full employment. Incentives to producers are essential for investment, production, and employment. Simultaneously incentives must be given to the general public so that they work and save more. The main goal of supply-side policies is to keep inflation levels controlled and attain full employment and better economic growth.

How do supply-side policies help to achieve economic growth?

When there is a reduction in the personal tax rates, people feel incentivized to work more, and they tend to save more. When savings are more, the short-term interest rates begin to fall, and as a result, more investments are attracted. Thus, we can see that reducing the personal tax rate will increase capital stock or investment in the economy.

Reduction in corporate tax rate is another incentive given to businesses - they are motivated to invest more and produce more goods and services. Better investments have the potential to increase the average productivity of labor and capital. Moreover, as per supply-side economists, it is beneficial to provide tax relief to companies engaged in research and development because research and development are essential for productivity increase in any economy.

Reduction in tax rate can be a reason for introducing black market operations in an economy. The more the black-market transactions, the lesser will be national income of the country because the underground economy transactions go unaccounted. 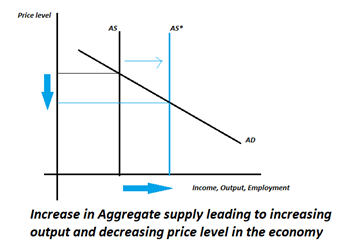 Another way in which the growth rate increases in the economy is when the tax rate decreases and there is higher disposable income with the people. As a result, there is potessntial for more demand in the economy. When demand increases, the production will have to increase to meet the level of demand. Only in such a case will there be balanced growth without any shortages in the economy- it is also ensured that the inflation rate is lower.

When inflation rates are lower in the economy, there is an increase in net exports, and as a result, the exchange rate improves. The increase in productivity will lead to more production for exports and currency strengthening, which will ultimately reflect economic growth.

What are the common policy prescriptions under supply-side economics? 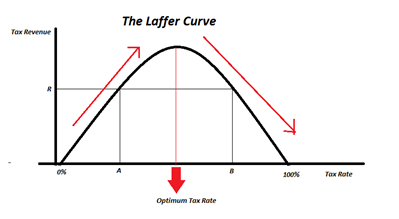 Policies employed under supply-side economics are to have a controlled monetary expansion so that inflation rates are low in the economy. Similarly, investment allowances also are useful for increasing the aggregate supply in the economy because such measures boost investments. According to supply-side economics, reduction in welfare benefits, especially in terms of unemployment allowance, is helpful to increase aggregate supply because then people will need to work and accept jobs even if it is a low-paying job. As a result, unemployment will decline in the economy, and there will be economic growth. Supply-side economists believe that the power of trade unions must be restrained so that the markets can become more competitive. Trade union activities aim to shoot up the wages because of which the output may not have a comparative advantage in the market. As a result, the demand tends to be lower than that of the competitors of that product. Another critical policy used is deregulation and privatization- this again is a policy to bring in the competitive advantage in the sectors in the economy. Consumers should be given a wider choice and lower prices through this measure. Free trade and free capital movement among countries is a supply-side measure for boosting economic growth. When there are lesser controls, and the movement across borders is easy for merchandise, there is more production of output and expansion of markets. The scope for monopolies becomes negligible.

What are some of the criticisms of supply-side economics?