What is the Say’s law of market?

Say's law of market says that supply creates its own demand. In 1803 Jean Baptiste Say gave Say's law in the book “ Treatise on Political Economy.” According to Say's law, the income earned by people from their contribution to production in the past becomes the source of demand creation for purchasing the current production. Thus it is essential first to produce before they can demand anything in the market.

Why was Say’s law important?

Say's work gained importance because it spoke of wealth creation by society and about the nature of the economic activity. Only by selling something and getting something in return can the entity have the ability to demand. Thus the ability to demand goods or services has a prerequisite, i.e. income generation by contributing to production. The view put forth by Say's law was against the Mercantilist theory, which said that the source of wealth is money. According to J.B. Say, money was only a medium of exchange. It was a means to transfer ownership of goods- money was only the means and not an end. 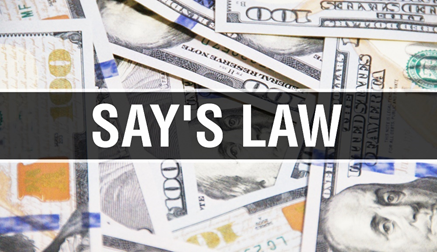 What are the assumptions of the law?

The theory that supply creates its own demand is based on the following assumptions: - 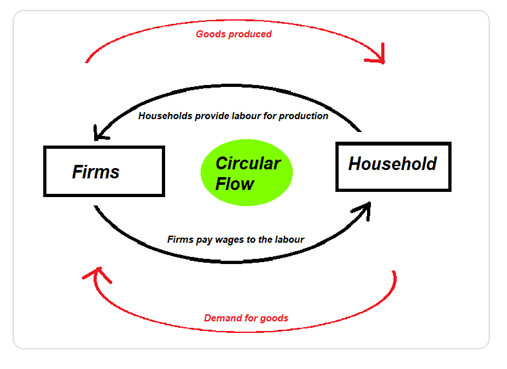 Suppose a firm produces goods worth US$1000, it distributes the same amount in the form of factor payments. As a result, there is purchasing power worth US$1000 with the households. These households in the economy provide labour or expertise and received factor income in lieu. When households demand worth US$1000, the firms provide them the produced goods in exchange. This, however is a scenario of no leakages, i.e. either no savings or everything that is saved is invested- this is a highly simplified concept without government intervention and no trade with the rest of the world.

What are the implication of Say’s law?

As per Say, certain commodities might be overproduced, but a general glut like depression would not happen because the production process itself creates a set up such that it will be demanded as shown in the simple circular flow diagram above. If, however, overproduction occurs in a particular industry due to a mistake, it will be automatically remedied when businesspeople experience losses and switch from the production of items they cannot sell to the manufacture of things they can sell. Ricardo and Mill backed up Say's position, who shared Say's belief that a general market glut could not arise.

Going by Say’s law, the economy should always operate at full employment. If supply creates its own demand, there will never be a situation of deficient aggregate demand, and thus full employment will be there. As there are more producers and more kinds of products in the economy, the economy will prosper. There will not exist a situation of overproduction because whatever is produced will ultimately be demanded in exchange for money. Thus those in the society who only consume and do not contribute to production will become a glitch for its growth because it only eats into the existing pool of wealth, whereas producing and then accumulating goods leads to wealth creation. To bring about economic growth, the boost should be in production rather than in demand. The success of one producer will prove beneficial for other producers whose product they will subsequently buy. Thus policies that encourage production and investment in own country and the neighbouring countries will ultimately lead to the output in the economy increasing. If nations follow Say's law, then even in trade deficits, imports will benefit the economy.

According to the classical economists, savings too are a form of spending because the income earned is partly consumed and the remaining is invested; thus, there is no fear that the flow of income would break in the economy. This is also the very reason behind the theory that there will never be overproduction and that there will always be full employment equilibrium. Even if there is a deviation from full employment levels, there is a tendency to move back towards it.

What are the criticisms of Say’s law?

Few reasons why Say’s law has been strongly criticised is given below:-

Why is Philcoin (PHL) crypto falling?

Crypto rumours swirl about GTA 6: Here’s what we know so far

What is the link between KnownOrigin, NFT marketplace and eBay?

CBDCs, not crypto, are the future of money, says Bank of International Settlements