What is Black Market?

The illicit, uncontrolled, and unchecked selling of products and services is known as a black market. When the government tries to regulate prices or imposes an overly high tax burden on transactions, black markets emerge. Since sales are not registered and no taxes are charged on purchases, it could damage the economy.

What causes the black market to exist?

The black market is a part of the economy where trade takes place without the government’s knowledge and involve violating rules, such as failing to file tax returns on time. Since transactions on black markets are not registered, they distort economic data.

Participants in black markets may not intend to behave illegally, but they do so because they are unable to work lawfully and must make a living, they do not report their employment or earnings to the government. When students seeking employment abroad without a work visa, illegal immigrants secure jobs, or children working more than minimum age requirements, such circumstances occur.

Sometimes sellers seek to participate in the black market to earn more money than they could legally. The shadow economy is the only way for certain consumers to purchase an illicit product or service. Some customers want a legal product or service at a lower cost or with a quicker delivery time. Some buyers seek a hard-to-find legal good or service.

Since the Internet's invention, entering into the underground economy has become easier. Today's black market is largely based on the dark web. The dark web consists of all websites that are not indexed by search engines and are used for illegal activities.

On the black market, however, not all sales are cost-effective. Many goods are costly because they are illegal to obtain. Someone who is unable to legally purchase a handgun may have to pay two or three times as much on the black market.

What are some of the characteristics of the black market?

The black market economy has certain distinct characteristics. It can include services and products that are legally barred. It may be able to offer legal services or products that enable people to avoid paying taxes.

Money laundering is a method used in the black market economy to turn payments into a legal form. The purpose of money laundering is to transfer money from the illicit trade through a series of transactions to hide the money trail.

What distinguishes the black market from the grey market?

The black market is a marketplace where illicit or tainted products are traded for cash. It will continue to exist as long as consumers are engaged in purchasing products at a lower cost.

The grey market refers to goods that, in most cases, are completely legitimate, but are marketed through illegal channels. Someone is likely selling a product for which they do not have a licence to avoid paying taxes to the government.

In the grey market, even the most innocent services could exist. Many parents hire a babysitter to handle their children. The babysitter is generally paid under the table, which means the babysitter does not have to disclose the salary to the government. 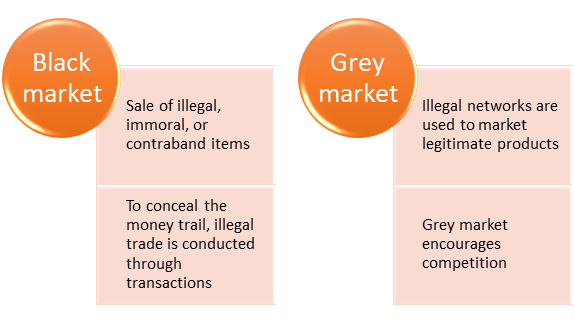 What are the benefits of the black market?

People who may not have good choices in the legal economy will find work and earn money in the shadow economy. A street market, for example, allows thousands of vendors selling similar goods to compete.

It enables people to access health care, medications, and other important items that they may not otherwise be able to obtain. Someone can, for example, purchase a legal drug on the black market because they are unable to obtain it legally and require a lower price. Since they are escaping the costs that other businesses face as a result of government legislation, the black market trader will be able to sell the medicine at a cheaper price.

It also assists countries in weathering economic downturns. People who lose their jobs move to the shadow economy to make ends meet before the recession ends.

What are the dangers of trading on the black market?

The shadow economy pushes out legitimate businesses that can't compete with illicit operations' cheaper prices. Some black market participants purposefully create a scarcity of legal products to compel people to buy from them.

The government loses revenue because it does not tax the black market, causing the country's GDP to collapse. 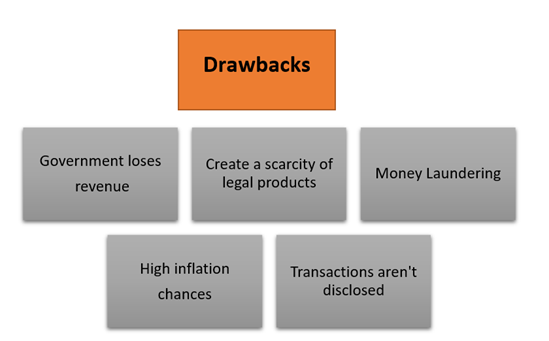 What are some real-life examples of black markets?

Taxes are not levied on certain legitimate goods and services. If a construction worker accepts a cash transaction and does not disclose it on his taxes, he is participating in the black market economy. 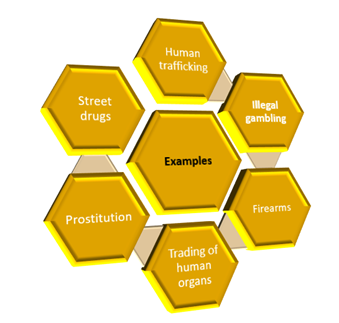 What is the economic effect of the black market?

As a result of black-market operations, government revenue is limited. The black market also lowers a country's estimated GDP, which is the overall value of all products and services sold.

The growth of the black market may have a positive impact on the legal economy in certain respects. When people make money on the black market, they are more likely to spend most of it in the legal market, which helps to improve the economy and generate tax revenue for the government.