What is Freudian Motivation Theory?

Neurologist and psychoanalyst Sigmund Freud developed the Freudian theory of motivation. According to the theory, people’s choices are largely based on their unconscious behaviour. This means that people may seek motivation for buying certain goods through their unconscious channel of thinking. 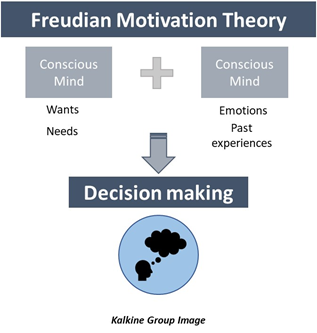 Individuals may not always fully understand why they make certain choices, since these are driven by their unconscious behaviour and not necessarily by wants or needs. This theory is frequently used in understanding consumer behaviour and in analysing the purchasing patterns of individuals.

What are the components of Freudian motivation theory?

According to Freud, the human psyche has two different parts: the conscious mind and the unconscious mind. Both these include three components in total: id, ego and superego. 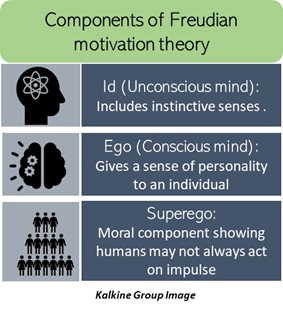 In some people id may be stronger; however, in others superego may be stronger. The relative strength of id, ego and superego determines how a human being takes decisions.

Why is the Freudian motivation theory important?

Freudian motivation theory can be applied in the fields of sales and marketing. The theory suggests that individuals may decide which products to buy based on their emotions and feelings, without consciously knowing it.

Consider the example of a man who buys a new car given the fact that his old car is in good working condition. It is possible that the man’s decision to purchase a car was motivated by his urge to create a status symbol for himself in society. This decision may not be as conscious as the buyer would think it to be.

How is the Freudian motivation theory applied?

Corporations may reach out to motivation researchers who collect data from potential customers. The data is collected through interviews to understand the deeper motives behind buying a particular product.

These researchers may use various techniques like word association, picture interpretation, sentence completion, role-playing, etc to understand how individuals make decisions. This information can enable marketing researchers to decide how these unconscious motivations can be best exploited to make the product lucrative to individuals.

What are some other theories of motivation?

Apart from Freud’s theory of motivation, there are two other popular motivation theories. These include:

According to the hedonistic theory, there is an optimal level of normal functioning in every individual, allowing him to make the right decisions. However, if the individual were to fluctuate from this position to disequilibrium, he would not find it pleasurable.

Thus, every human being strives to be in a state of equilibrium by maintaining an optimal level of needs like food, water, etc.

How can amalgamation of games at work help employees enhance their well-being?,

Tesco, Sainsbury, Ocado: Is it right to invest in supermarket stocks now?