The increased unemployment in the economy becomes a reason for reduced demand for fixed assets. Again the consumption expenditure of the component is impacted, further pushing down the aggregate demand in the economy.

To protect the economy from spiralling further into economic slowdown, it is crucial to introduce expansionary policies to revive it.

Aggregate demand in an economy comprises consumption expenditure, private investment, government spending and net exports. Therefore, when economic growth is low, there is a need for expansionary policy to boost these components of aggregate demand. 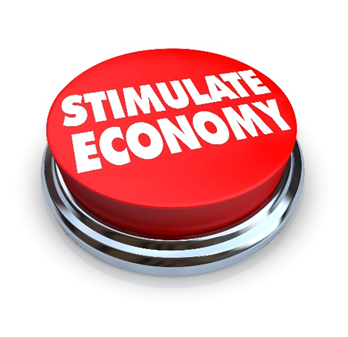 What are some of the expansionary monetary policy measures?

One of the measures used is to bring down the interest rates. When this measure is implemented, the cost of borrowing falls, and credit becomes cheaper. As a result, people may borrow more to make capital investments or to boost their consumption expenditures. As a result, the aggregate demand in the economy can increase.

All commercial banks are expected to maintain reserves with themselves and with the central banks of the country. If these reserve requirements are lowered, more money supply can be injected into the economy. Banks can lend more of their deposits if the reserve requirement is low. It's creating credit, so the measure is expansionary.

Another monetary policy measure is the use of open market operations. Under this policy measure, the central bank buys government securities- this results in the injection of more funds into the economy. For example, since the pandemic hit, the US central bank has consistently been making purchase of treasury securities to boost economic growth. This measure of quantitative easing also leads to the decline in interest rates on bonds. Again the impact will be a lower cost of borrowing.

All these measures create credit and boost the aggregate demand in the economy, thereby increasing the nation's output and employment levels.

What are some of the expansionary fiscal policy measures?

Decreasing income tax increases the disposable income of the consumers and thus improves their purchasing power. As a result, the consumption expenditure component of the economy’s aggregate demand is improved. Private investments can also be encouraged by allowing tax rebates on the taxes on their corporate profit. Corporate tax cuts put more money in the hands of firms, which the government believes will be invested in new projects and create more jobs.

In addition, the boost in government spending can be done at the central level or by funding the states or provinces. In this way, increasing the production of goods and services can also move the economy's aggregate demand upwards. For example, as part of expansionary fiscal policy government can begin projects for road construction, expansion of healthcare units, building schools etc.

The government may also increase subsidies and increase transfer payments to improve the purchasing power and thus the economic activity in the country. Stimulus packages and unemployment benefits speed up the process of expanding the economy's aggregate demand.

What is the impact of an expansionary policy on an economy? 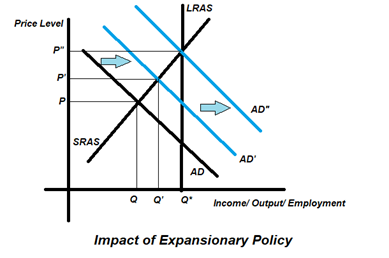 When expansionary monetary or fiscal policy is implemented, the aggregate demand in the economy increases. Initially, the economy's equilibrium output was low at level Q. Suppose, as part of expansionary policy government gives out a stimulus package to boost growth amidst the pandemic. Now AD curve will shift rightwards to AD'- prices and output will increase to P' and Q' respectively. Since the output is still much lower than full employment levels and unemployment is still high, the government may invest in infrastructure building. This will give people income and employment and boost their purchasing power. As a result, aggregate demand increases further from AD' to AD"- this is accompanied by an increase in price levels and movement of output towards full employment level output Q*. 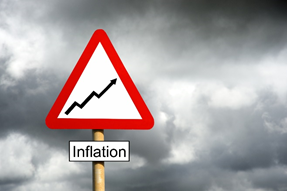 Are there any risks associated with expansionary policies?

Credit can easily lead to consumers and companies borrowing excessively, which may not be desirable in the long run. Also, the general price levels in the economy begin to rise. If a timely tightening does not follow expansionary policies, the prices of goods may rise faster than wages, the savings may decline, and currency would depreciate heavily. Uncontrolled spiralling inflation can also end up in a state of hyperinflation.