Commodity markets across the globe have seen a seesaw trail with few commodities sought by investors to beat market volatility and inflationary risk such as gold, and bitcoin witnessing a decent rally, while consumption-based commodities such as base metals and oil plunging in the wake of the adverse economic impact caused by the outbreak of COVID-19.

Gold prices have skyrocketed recently as investors pursued safe havens to hedge their market portfolio against the brief sell-off witnessed across the globe due as COVID-19 infection rate cemented to prompt various governments to restrict daily economic activities in order to contain the spread, and ease liquidity in unheard proportions.

The gold spot market rose from the level of USD 1,445.61 (low in November 2019) to reach a high of USD 1,747.85 in April 2020, which marked a price appreciation of ~ 20.90 per cent. The spot market halted in between the rally due to the margin calls, which demanded higher liquidation in gold futures.

However, post that the quantitative easing and higher credit again supported the gold demand and the commodity resumed the rally to reach USD 1,747.85 and a record high of $2,776.37 in March 2020 on the domestic front.

To Know More, Do Read: Why is Gold a Consensus Buy and Why are Money Managers Buying It? 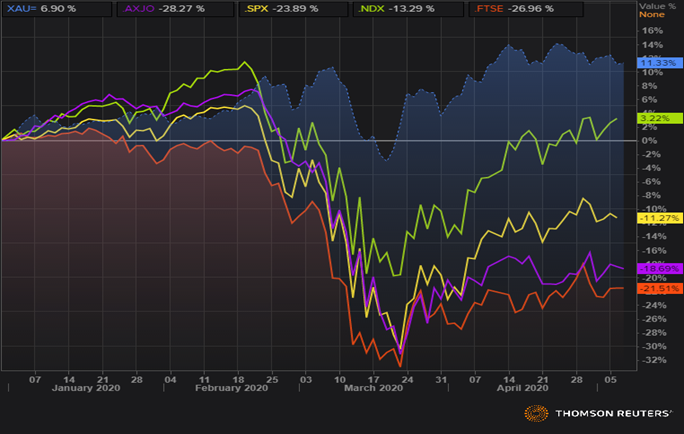 Gold is among the very few asset classes having a positive YTD return, and it has relatively outperformed all major equity indices as well.

However, in the status quo, gold prices are again retracing and showing a bearish pattern formation on charts as slight improvement across the global economic front is now evident in the market with the unemployment rate falling across the United States post ballooning to a multi-year high.

Also, the buying activity from Central Banks, which initially propelled the gold price is now cooling-off with Russia announcing to put a brake on the net buying, and other Central Banks put a hiatus on the recent buying.

Crude oil prices remained largely in pressure since the beginning of the years, and despite an agreement of a record production cut by the oil kingpin Saudi and Russia of 9.7 million barrels per day, the weaker demand scenario and supply glut (especially from Shale boom and higher production from other non-OPEC countries), had even dragged the commodity below zero, where sellers were ready to pay buyers to take some of their crude oil, as producers ran out space to store them.

To Know More, Do Read: Why US-Backed OPEC+ Production Cut Is a Failed Stimulus in the Status Quo?

However, in the status quo, crude oil prices are now recovering back as demand slightly picked up and major global oil-producing countries such as Saudi Arabia, Russia, and the United States scaling back their production as per their agreement.

Uranium is now becoming a metal of strategic importance with many countries such as Japan, the United States, and in Europe, turning back to nuclear energy generation after substantially increasing safety measures to avoid any Fukushima Daiichi nuclear disaster like situation.

In the status quo, the Trump administration has proposed a creation of uranium reserve to support the strategic U.S. fuel cycle capabilities via providing assurance of availability of uranium in the event of market disruptions.

America currently aims to restore its leadership in the nuclear space and has recently proposed to purchase 19 million pounds of uranium. 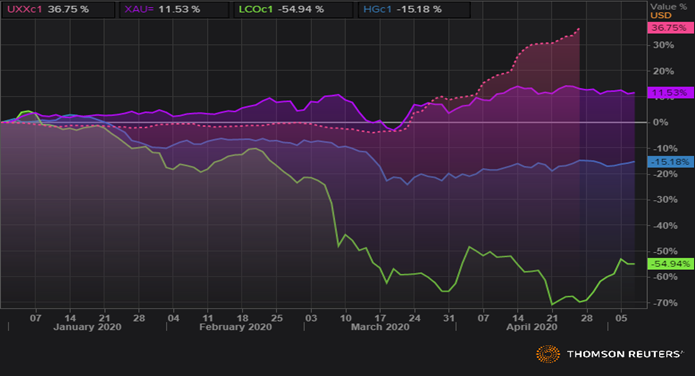 On comparing the YTD performance of uranium with other consumption-based commodities such as crude oil and copper, it could be seen that uranium has outperformed them, even safe-haven gold; thus, uranium is among the top-most gainer of the year 2020 so far.

Base metals are among the hardest hit amidst COVID-19 outbreak due to the halt in global activities such as construction, infrastructure development, and automobiles, which in turn, has exerted tremendous pressure on base metals prices.

However, in the status quo, the current restriction imposed by many governments across the globe is prompting many large players to curtail the production of base metals and some are even finding even difficult to maintain the production guidance and withdrawing them, which in turn, is now supporting copper prices, as the market anticipates these challenges to create a supply void over the medium-term.

To Know More, Do Read: Base Metals Out of Woods Poised for an Overnight Spike or Risk of Another Sell-off Remains?

To Know More, Do Read: Where Would The Australian Supply Fit in the Projected Global Nickel Deficit Ahead?

Bitcoin prices have recently spiked as the halving day approaches, which would now bring the reward per block for miners to 6.25 bitcoins, which is further anticipated by the investing community to clip the bitcoin supply over the long-run.

To Know More, Do Read: Bitcoin Gains Momentum Ahead of Halving Day Deadline; What Are Chartist Looking At?