2020 seems to throw more punches than any intelligent market observer would have fathomed. COVID-19 brought the industrial activities across the globe to its knees, and the ramifications seem to be spread wide across. Crude oil is the new major causality. On 01 Jan 2020 WTI was quoting at $61.18 and come 20 April 2020, it crashed to -$37.6, a -161% decline. One could blame the demand side of the equation for this catastrophic fall.

The crude oil future contract for April expiring on Tuesday, had no takers and finally recovered from the sub-zero levels and currently trading at $1.45 (as at AEST 3:23 PM). 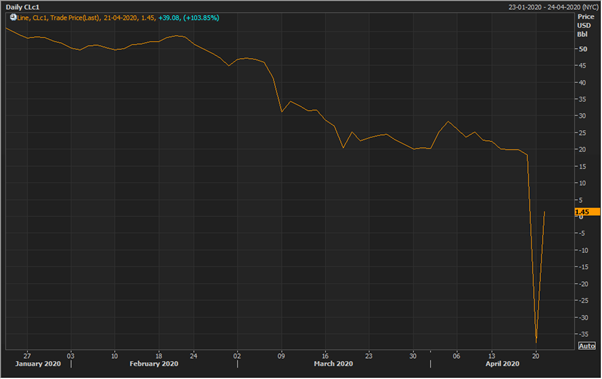 We live in an unprecedented time. Until yesterday we used to talk in reference to the coronavirus outbreak but today is indeed a day, which oil companies would remember for a long, long time. The price action in the WTI crude oil may lead to a domino effect on the energy stocks. The recent OPEC projections indicate that the world oil demand growth would decline by 6.9 mb/d, with April expected to take a hit of around 20 million barrels a day.

The total confirmed cases of coronavirus stood at ~2.475 million globally with the death count of 170,261 as of 21 April 2020 at 12:43 PM AEST. While the global pandemic seems to be slowing down in economies such as Australia, the virus outbreak has infected over 786,000 people in the US, claiming over 42,000 innocent lives.

Are the current Supply Cuts enough?

The global pandemic has led almost half of the global population under quarantine, worsening the demand situation even further and at the same time the drying of demand has led to rapid filling of the oil stockpiles. The recently announced supply cut by the OPEC+ nations is anticipated to come into effect from 1 May 2020. We had earlier anticipated that the supply cut would not be enough, and the supply glut situation will persist requiring a further production cut by the oil-producing nations.

We believe that the oil producers still overestimate the demand and the supply cut would not solve the current oversupply situation. We reiterate that in order to prevent any further bloodbath, effective supply cut decisions need to be taken and that too quickly. We believe that WTI prices reaching the negative levels will definitely open the eyes of the US.

The future oil contracts are traded by both the oil companies and oil traders but as the expiry date approaches the future contracts are exchanged by the oil refineries that actually take the final delivery of the crude oil for their refining requirements.

The US and the Oil Stocks

Western Texas Intermediate crude oil is primarily sourced from the Permian basin with Texas as the major contributor. The crude oil is then sent to Cushing, Oklahoma through a pipeline. Once the crude oil contract expires, the refiners then take the delivery of the underlying crude from the Cushing storage hub. In the absence of any buyers, the hub’s storage has reached over 54.965 million barrels of oil as of 10 April 2020.

The Cushing stockpiles have a storage capacity of 76.093 million barrels of oil (as of September 2019). In the absence of oil demand and negative WTI prices, if the US upstream players do not cut down the oil supply significantly their might not be enough available capacity as there might actually be no major available capacity for the oil production in the upcoming months. The recent EIA reports indicate that over 57% of the total working storage capacity has been filled. 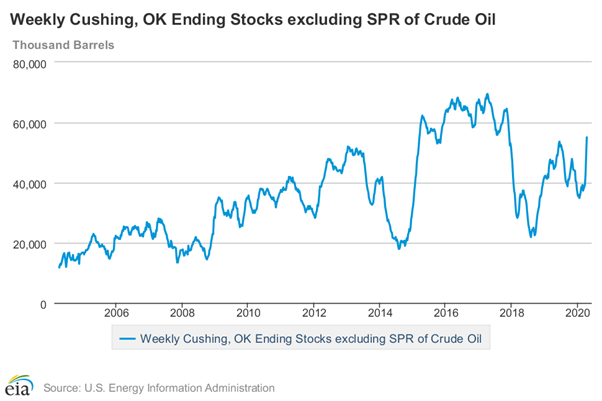 We believe that the US government would have to either buy the crude oil from the oil producers or provide them with a much-required stimulus package. Further, in the global perspective, we anticipate further supply cut by OPEC+ and OECD producers.

Fears of recession and economic meltdown have been plaguing the global oil-based economies. One such economy is Iraq, which earns almost 90% of the state’s revenue from oil, with the reducing oil prices the state revenues have fallen considerably at a time when the country bleeds through the coronavirus pandemic. In fact, Iraq’s oil minister Thamer Ghadban had raised concerns over the oil trade in the oil-based economies amidst the pandemic in the past.

The previous lows of the WTI were during 1986 when Richard Nixon led the United States. The WTI oil future prices touched the lows of around ~US10 a barrel. We believe that the North Sea oil producers who follow the Brent crude oil benchmark will take further actions to prevent any such incidents in the sweet crude oil benchmark prices. 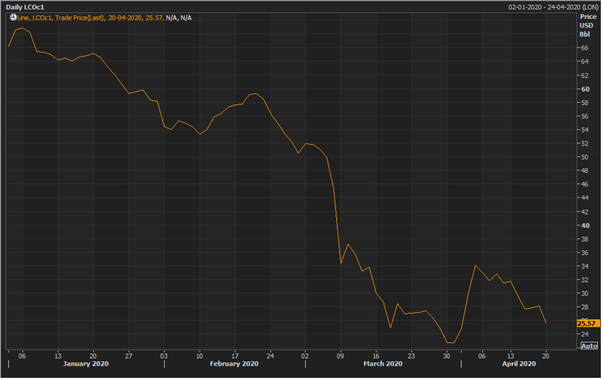 Impact on the Oil Industry

The lower crude oil prices will impact the oil players. The oil industry segmented majorly across upstream and downstream.

Upstream is the activity to extract crude oil through oil wells. The lower crude oil impacts the upstream industry adversely as the lifting and pumping costs make up for considerable expenditure which may lead to further oil upstream players filing for bankruptcy. Earlier, the North Dakota’s leading oil producer Whiting petroleum had filed for Chapter 11 bankruptcy in April. The restructuring of the company’s debt led to a new equity holding structure in which the lenders hold almost 97% of the company’s share.

China, the origin of the virus outbreak has started to ramp up its industrial activity and has lifted the quarantine norms in most parts of the country. The oil demand from the economy is expected to rise over the upcoming weeks and we anticipate further growth in oil demand from the lifting of lockdown partially in some part of India as and when the Government takes a call. Resumption of demand is the only hope for the crude oil prices to stem the fall and see an upward price revival.