Despite the remedial efforts by the oil producers, the bloodbath in the oil prices seems incessant. The WTI crude levels fell to the lowest levels since 1999 - that’s a 21-year low as demand concerns concerning the black gold persist. The US benchmark, the Western Texas Intermediate (WTI) traded at US$15.61 on 20 April 2020 at 12:23 PM AEST. 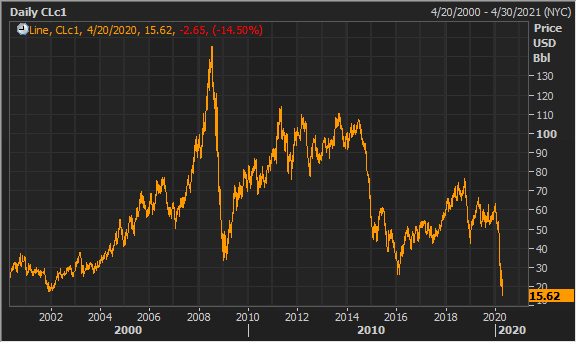 OPEC+, the group of major oil producing nations including Saudi Arabia and Russia, had announced to cut the oil supply by ~9.7 million barrels a day, effective from May. With the oil demand in a fathomless hole, the oil prices continue to fall. The leading oil producers need to reassess if the demand decline has been underestimated as indicated by many industry experts. Amid the coronavirus outbreak, almost half of the world population now resides in quarantine. The lower crude oil prices have led the global economies to buy oil inventories. However, oil being a commodity that is more widely used directly from supply, refined and sent to the outlets, the little inventory capacities have neither helped the oil importers significantly nor has it helped in maintaining the oil demand.

The total COVID-19 confirmed case reached 2.4 million globally with over 165,229 deaths as on 20 April 2020 at 2:22 PM AEST. The US EIA has taken the factors mentioned above into consideration and has revised its estimates for average WTI oil prices to US$29.34 for 2020. Brent crude oil price has been projected to average at US$33.04 a barrel.

Lower oil prices may lead Iraq to an economic meltdown

Iraqi Government is the nation’s largest employer with large oil projects. The middle eastern country earns over 90% of its revenues through an oil trade. With the lower crude oil prices and the lower oil trade, the country’s economy is in the doldrums. Iraq had anticipated a monthly revenue of US$6.61 billion at US$56 a barrel of oil, but with the decline, has been generating a revenue of only US$2.99 billion at an average rate of ~$28 a barrel. The country’s oil ministry, led by Thamer Ghadban, had been raising concerns over the prospect of the oil trade amidst the crashing market. Such effects on a longer timespan may lead the economy into a recession.

Organization of the Petroleum Exporting Countries (OPEC) released the demand, supply and oil prices estimates for the rest of the year. OPEC believes the main driving forces for the oil price hit are the worldwide oil demand decline shock and massive sell-offs in the global oil markets. OPEC remains committed to the oil market and will continue to take much-required initiatives to support the further oil price decline.

Pandemic’s affect on the global economies

OPEC believes that the current pandemic is not restricted to a decline in the oil demand and prices but will also impact the global economic growth which is anticipated to decline to 2.9%, a 1.5% decline in comparison to the previous year.

Japan reported that its exports fell approximately 12% in March compared to last year, with a 16% fall in the shipments to the US. Early readings on April manufacturing worldwide are expected on Thursday, 23 April 2020 and are predicted to show recession-like readings.

Will Crude Oil Prices bounce back from the record lows? Must Read

As the Crude oil prices continue to bleed under the deprivation of demand, support may be incoming form the opening of the Chinese economy following the long quarantine period. In fact, the industrial activities are rising in China as the country gears up for global supply amid the worldwide lockdown.

The other major factor being oversupply, we do realise that the sudden oil demand dip took the global oil producers by shock. But, now that the oil suppliers have convened and decided to battle out of the current situation, further supply cuts can be expected as already indicated by Saudi Arabia and Russia last week.

A strong co-operative effort between the oil producing nations or regulatory authorities such as OECD and OPEC will help manage the oil supply better. Such an effort is crucial given that the reduced government earnings and the virus outbreak are proving to be a double whammy for the oil-dependent economies.

Once the oil supply cut begins from May, the oversupply situation is expected to subside soon. Though the lower demand may be expected from the current quarter, a lesser impact to the oil industry is expected. Once the demand-supply gap is negligible, a significant thrust in the oil prices can be expected. While the global economies gear up recovery to overcome the fears of a worldwide recession, the recovery period may lead to a sharp increase in the oil demand.

We request our readers to “Stay in and Stay Safe”. We will be back with more amazing content, till then do feel free to share this article on the social media handles and spread the love.