The Gold spot has finally perched below the mark of USD 1,700 per ounce and had penetrated the ascending triangle pattern, confirming the emergence of bearish sentiment across the bullion front. However, while technical analysis is leading to a belief across the investing community that the safe haven is now poised for a correction, fundamental figures are now emerging in the market, which is somewhat backing the price behaviour of gold.

Also Read: Gold Plunge- A Normal Correction or The End of the Glittery Shine for Now?

The investment in gold from the gold-backed ETFs and Central Banks remained considerably high during the first quarter of the year 2020; however, while the demand from gold-backed ETFs reached a multi-year record high, Central Banks seem to have restrained a bit with total demand from them cooling from the peaks of 253.02 tonnes (in Q3 2018) and the recent peak of 234.98 tonnes (in Q2 2019).

The holding of gold-backed ETFs reached 3,185 tonnes during the first quarter with the addition of a further ~ 150 tonnes of gold, while the overall investment rose by 80 per cent against the previous corresponding period to stand at 539.6 tonnes.

Fears over the economic and social impact of the virus drove safe-haven flows into many investment products, most notably into the gold-backed ETFs, and as per the data from the World Gold Council (or WGC), global holdings of physically-backed gold ETFs surged by 298 tonnes during the period, which marked the highest quarterly inflow in four years.

However, while the demand from the gold-backed ETFs remained strong, demand from many sectors took a hit, especially jewellery across Asia amid high gold prices across the globe.

The demand for jewellery plunged by 39 per cent against the previous corresponding period to stand at 325.8 tonnes with demand from Indian and China falling by 41 per cent and 65 per cent, respectively.

Likewise, the demand from Central Banks plunged by 8 per cent against the previous corresponding period to stand at 145.0 tonnes during the period, also lower against the recent peaks.

Central bankers across the globe largely remained focused on the measure needed to boost the domestic economy, which took a considerable hit in the wake of the COVID-19 outbreak, which further prompted the need for liquid and diversified international reserves, leading to a positive inflow in gold. However, the number of Central Banks adding gold to the reserve declined by four to stand at six during the period.

The widespread lockdown across many countries prompted manufacturers to halt their operations, impacting the demand for gold in the electronics segment. The LED sector in China remained one of the hardest hit with a year-on-year decline of 30 per cent.

While the above-stated fundamentals are mixed, one notable point is the decline in the number and addition of gold by Central Banks into the reserve.

While fewer banks added gold into the reserve many are now selling of the gold from it, with the Central Bank of Sri Lanka, Germany, and Tajikistan remaining net sellers. Russia, which remained the largest gold buyer since the end of 2005 suggested that it would suspend the buying programme from 1 April 2020, and as per the WGC, the suspension of the buying from Russia could have a material impact on the net buying ahead.

While longs are under a decline, the open interest has declined simultaneously from January 2020 peak and is now steady, suggesting that long unsettled contracts have been liquidated, which could be an early sign of a possible correction in gold.

A Quick Recap of the Recent Pattern Formation 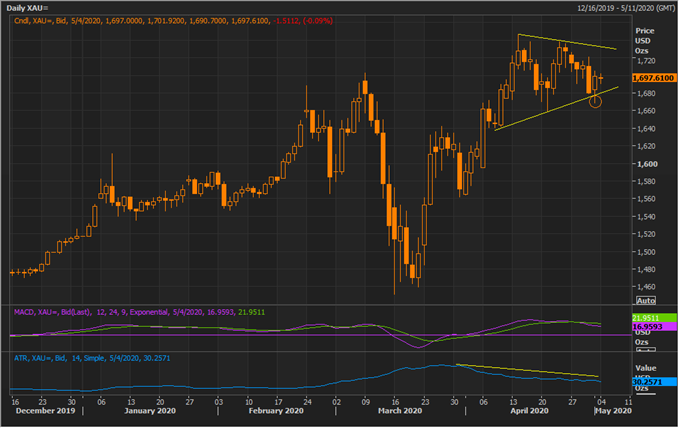 On the daily chart, it could be seen that the gold spot had slightly penetrated the triangle formation; however, bulls remained quick to react to the lower price and gold regained the value and moved inside the triangle.

However, despite a positive trail left by the gold spot from the starting point of the triangle, the 14-period average true range or ATR is showing a divergence with the price behaviour, reflecting that while the price is contouring a high, it is happening with lower volatility, while the 12,24,9 period MACD indicator is giving a negative signal. 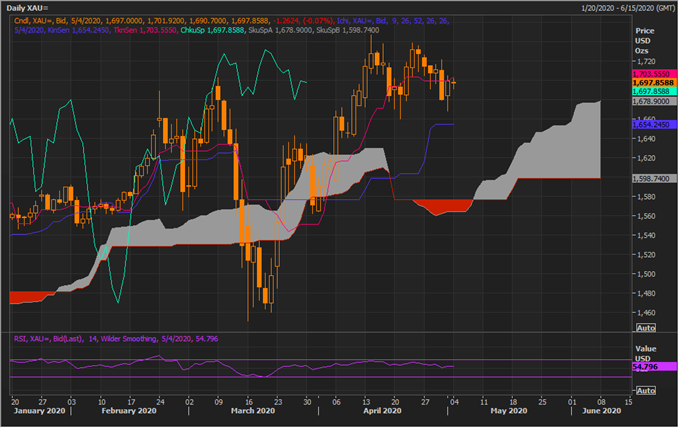 On applying the Ichimoku cloud on the daily chart, it could be seen that gold prices are trading above Span A. The gold spot has just slipped below the conversion line or say below the mean of 9-day high and low, suggesting the development of negative sentiments, which would be negated by bulls, if the spot price crosses the conversion line.

The base line or the mean value of 26-day high and low would now be immediate support to the price, below which the grey cloud area would be the support. It should also be noticed that post turning into the red cloud (Span A moves below Span B), the indicator quickly turned into a grey cloud (span A above Span B) with a large spread, suggesting that the breakdown below the triangle formation could be a real challenge for bears; however, if bears remain successful, it could mark the onset of a correction in gold on a daily timeframe.