Aggregate demand indicates the total value of final goods and services demanded in an economy. It comprises the flowing elements-

Aggregate demand is impacted by the exchange rate, interest rates, income levels, individual wealth and inflation. There is an inverse relationship between aggregate demand and the general price levels in the economy. The aggregate demand curve is downward sloping.

The total quantity of products and services produced and sold at a particular price level is known as aggregate supply. There is a positive relationship between price levels in the economy and aggregate supply in the short run. However, in the long run, the economy reaches its full-employment output, and thus output remains constant across price levels. The short-run aggregate supply curve is upward sloping, while the long-run curve is perfectly inelastic and parallel to the axis representing price level.

What are the causes of demand-pull inflation?

Various factors can lead to demand-pull inflation- Interest rate reductions result in increased consumer spending and investment. This increase in demand raises AD and inflationary pressures. Similar is the impact of an increase in housing costs. As per the wealth effect, people spend more when the value of their assets improves. Thus a positive wealth effect is created due to rising property prices. Real wages increasing due to labour union demand or laws on raising minimum wages also shoot up aggregate demand in the economy. When the domestic currency depreciates, imports become more expensive, and exports become cheaper. When net exports increases, the economy's aggregate demand increases.

Prices often rise as a result of the expectation of rising inflation. To 'catch up with inflation, workers and businesses begin to boost their prices.

When the productive capacity increases less than proportionately to the increase in aggregate demand, the economy will face excess demand. Thus suppliers will increase their prices. Firms will also hire more people as they expand production. Unemployment will decrease as a result of this hiring spree. The increased demand for workers becomes the reason for salaries are being pushed up, resulting in wage-push inflation. Finally, greater wages boost employees' disposable income, resulting in increased consumer spending.

What is the Keynesian explanation of demand-pull inflation?

During the second world war, Keynes, in his booklet "How to Pay for the War", explained that the excess demand for goods in proportion to the economy’s full employment level of output is what leads to the rise in general price levels in the economy- this concept was called inflationary gap as shown below: -

Full equilibrium output is when income is equal to aggregate demand – this is corresponding to point E. The full-employment output level in the economy is Y*; production cannot expand since all the factors of production are fully employed. However, when aggregate demand is more by level TE at full employment level of output, the gap TE is an inflationary gap. Aggregate demand TY* is more significant than EY*. As a result of this excess demand, Y* level of output becomes more valuable in money terms. This explains that the Y* to Y movement is only because of the increase in money value and not because of an increase in actual production.

Because of the inflationary gap concept was given by Keynes, the theory of demand-pull inflation is often associated with Keynes.

How does the concept of demand-pull inflation operate? 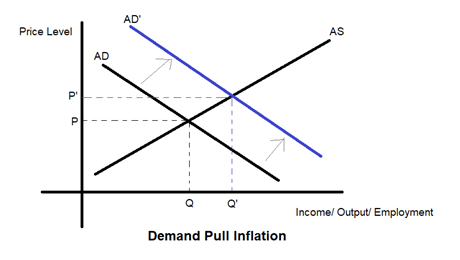 What is the link between demand-pull inflation and the Phillips Curve? 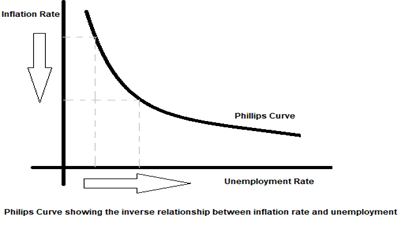 How can demand-pull inflation be curbed?

The government can use fiscal or monetary policy measures or a combination of the two to curb inflation in the economy caused by demand-side pressures.

As a fiscal policy measure, the government can raise taxes such as income tax and reduce spending- this serves to lessen demand in the economy while also improving the government's budget condition.

As a monetary policy measure, higher interest rates in the economy restrict demand. This measure increases the cost of borrowing and thus impacts spending capacity too. Simultaneously the opportunity cost of withdrawing money from the savings account to meet consumption expenditure is higher when interest rates are more. All this results in slower economic development and lower inflation.