The Company has finalised more than 37,000m of drilling in Phase 1 and Phase 2 programs so far in 2020, extending numerous existing deposits and discerning five new satellite deposits in the process. McIntyre is one of these five new deposits identified in Phase 1 RC drilling, with other four being McClaren, Ridge, Old Town Well and Plum Pudding.

The infill and extension drilling undertaken at the new McIntyre gold deposit has confirmed broad intervals of shallow dipping and banded iron formation or BIF-hosted gold mineralisation from the surface. The Phase 2 RC drilling has returned better infill and extension RC drill intercepts from the McIntyre deposit, as indicated in the below figure: 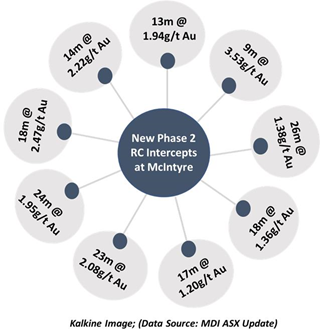 Gold mineralisation at McIntyre is hosted in a very shallow northeast-dipping BIF unit, 8m to 25m thick, which is mineralised from the surface. Besides, mineralisation remains open to the east, which has now been extended on the southeast side of a narrow ‘rift’ structure.

Middle Island notified that the detailed geological mapping near the McClaren-McIntyre-Ridge satellite gold deposits, together with ongoing RC and diamond drilling and high resolution airborne magnetic data would support in resolving the complex structural and stratigraphic architecture in this high-grade area.

Moreover, the Company expects further work to demonstrate continuity between the three satellite gold deposits, given their close proximity to each other.

Following the completion of Phase 2 drilling campaign, which is designed to infill and extend the five new satellite open pit deposits to an Indicated Mineral Resource category, the Company will undertake reconnaissance RC drill traverses around the 1.1km-long Shillington Gap target.

The Company is also likely to report assays for the remaining four new satellite deposits in coming weeks.

Going forth, Middle Island intends to formulate a resource estimate of the McIntyre deposit to the extent necessary to derive an Indicated Mineral Resource classification, which would allow these to be optimised, evaluated and incorporated into the feasibility study as Ore Reserves.