Along with the previous two new gold discoveries at McIntyre, McClaren deposits, the recent Old Town Well deposit considerably increases the prospect of an favourable decision to recommission the Sandstone mill.

Middle Island has released 4m composite assay results from a further 35 holes (2,580m) of the Phase 1 RC drilling program, encompassing 172 holes in total. The Company has declared assays from drilling at the Old Town Well (15 holes; 1,326m) and Davis (20 holes; 1,254m) prospects, which were prioritised in Phase 1 RC drilling program based on their interpreted ability to produce open pit gold Mineral Resources. 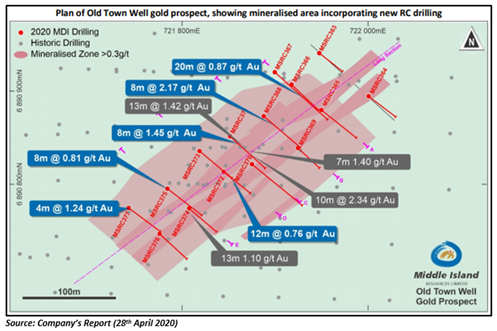 All significant gold mineralisation at Old Town Well defined to date seems to be hosted within the oxidised laterite and saprolite profiles. Additionally, there are broad zones of intense alteration and quartz veining in the primary zone at Old Town Well, creating a possibility that drilling so far is peripheral to far more considerable gold mineralisation along strike or down dip/plunge.

Middle Island expects Old Town Well to represent a significant oxide gold deposit, with most of which is relatively shallow, comprising a blanket of mineralised laterite from surface. Subject to 1m resampling, and infill RC and diamond drilling, the Company intends to assess this deposit as part of its updated PFS (pre-feasibility study), likely to be completed in June 2020.

The Company also declared the best 4m composite RC drill intercept of 8m at 0.95g/t (from 44m depth in MSRC366) from the Davis prospect. Along with this, two additional mineralised laterite and saprolite intercepts were obtained from a 2nd element of the Davis palaeo-surface gold anomaly to the north. 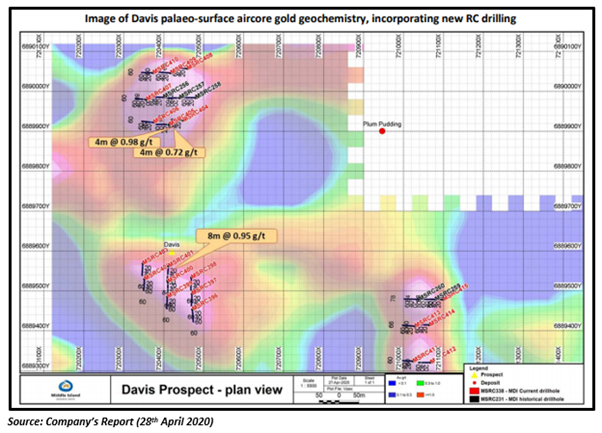 The Company is likely to report results of the remaining 95 holes (6,639m) drilled as part of the Phase 1 RC drilling program in coming weeks.

Middle Island’s success in Phase 1 RC drilling program to date makes it more pronounced that the scheduled Phase 2 RC drilling program (~3,000m) has to be substantially expanded to bring new discoveries into Indicated Resources for inclusion into the PFS. Following the completion of the PFS update, the Company is likely to take Sandstone gold project recommissioning decision, which will potentially pave way for commencement of production from the project. 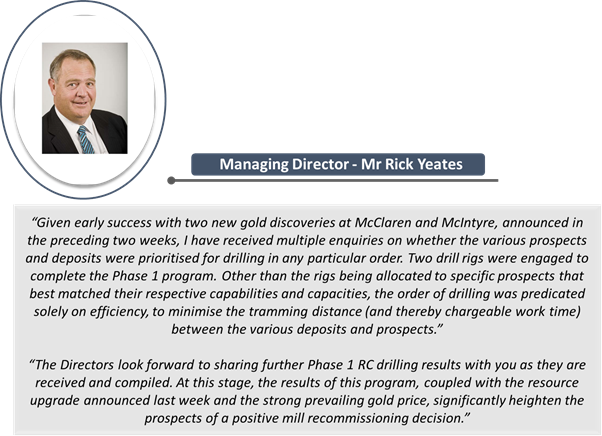