The new Mineral Resource consists of 480,000oz connected with the tonalite-hosted portion of the deposit and 20,000oz associated within the banded iron formation (BIF)-hosted element.

Declared inside an underground resource optimisation wireframe with an effective date of 31st March 2020, the Inferred Mineral Resource is approximately 14.2Mt at 1.1g/t gold for 500,000 ounces for the Two Mile Hill deeps gold deposit (see figure below):

The new tonalite deeps Inferred Mineral Resource is obtained from a partial reclassification of the former Exploration Target, extending from the base of quantified open pit Mineral Resources at 140m below surface to ~500m depth.

As per the Company, the remainder of the original Exploration Target, extending from 500m to 700m depth, needs re-quantification as an Exploration Target, largely underpinned by a diamond drill intercept of 508.3m at 1.38g/t Au, including an interval of 160m at 2.13g/t Au from 432m depth.

It is worth mentioning that the lower 200m of the previous Exploration Target remains to be validated as a Mineral Resource through further diamond drilling at a later date.

It is imperative to note that despite being relatively insensitive to the gold price, the Two Mile Hill tonalite deeps MRE does not include part of the proposed recommissioning inventory at Sandstone. This is because the Company’s current plan is to only review development of the tonalite deeps deposit in its planned on-site existing mill production schedule in future.

The Mineral Resource estimate has been jointly finalised by Middle Island and the independent consultancy, Mining Plus Pty Ltd, that was commissioned by the Company to conduct an independent estimate of the Two Mile Hill deeps deposit, encompassing both the BIF deeps and tonalite deeps components.

The Company informed that it holds the responsibility of analytical and QAQC protocols, logging and sampling techniques and reliability of the drillhole data utilized in the estimation of the Mineral Resource, while Mining Plus assumes responsibility for the geostatistical analysis, geological and mineralisation interpretation, resource classification and resource estimation. 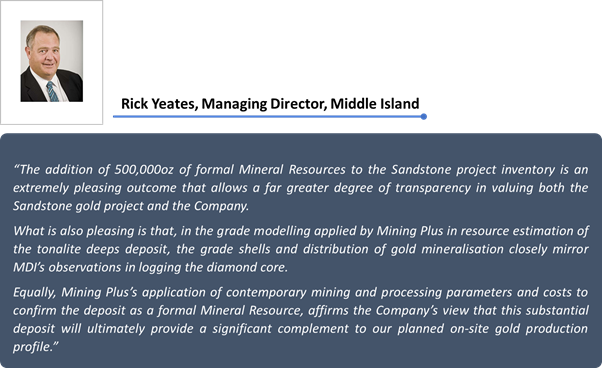 Notably, Middle Island is highly confident of its continuing aggressive exploration and resource definition campaign at Sandstone, which it expects to considerably add to or upgrade additional open pit Mineral Resources before the completion of the updated pre-feasibility study. MDI believes that, the massive increase in aggregate Mineral Resources comprising the Sandstone gold project will provide far greater valuation transparency of both the project and Middle Island.