McClaren is one of a cluster of three proximal gold prospects (also comprising Ridge and McIntyre), located 2.5km from the Company’s wholly owned Sandstone processing plant and hosted within the southeast extension of the Shillington banded iron formation (BIF) package.

The Company is waiting for Phase 1 RC drilling results for the McIntyre and Ridge prospects, which are expected to determine if McClaren mineralisation may prove considerably more extensive, possibly associated with the proximal Ridge and/or McIntyre prospects.

Extensively focussing on open pit targets, the Phase 1 RC program has tested around 14 gold deposits and prospects, all situated within 4km of Middle Island’s processing plant and most of them on existing Mining Leases.

The 14 gold deposits and prospects targeted under the Phase 1 RC program comprise 6 existing deposits and 8 with little or no existing drilling, prioritised based on their interpreted potential to produce open pit gold Mineral Resources.

In the Phase 1 RC drilling program, drill sampling was undertaken on 1m sample intervals on known deposits, with quantified Mineral Resources, while 4m composite sampling was applied for new prospects and targets. 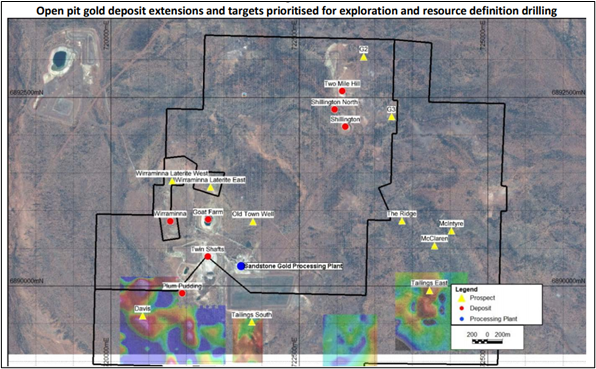 The results are derived from 30 holes (2,394m) of RC drilling finalised under Phase 1 RC drilling program, including 172 holes in total. The 30 holes can be categorised as follows:

Let’s quickly go through each of these prospects below: 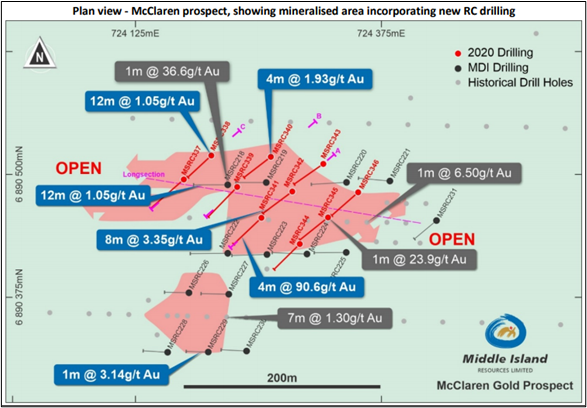 The Company sees a strong possibility of McClaren representing a new open pit deposit to complement the Sandstone project’s recommissioning inventory, subject to 1m resampling of composite results and infill drilling as part of the scheduled Phase 2 RC program.

Besides, the Company is yet to establish a link between the Ridge, McClaren and McIntyre prospects (beyond the common BIF host rock), the possibility of which is currently being clarified via detailed geological mapping.

Middle Island informed that the RC drilling is designed within the northeast quadrant of the Two Mile Hill open pit deposit to extend and/or give further confidence in the current 2012 JORC Indicated and Inferred Mineral Resources within basalts adjoining the mineralised tonalite.

The open pit optimisation studies suggest the northeast quadrant of the Two Mile Hill deposit is very sensitive to Mineral Resource upgrades and/or additions within the basalt, possibly deepening the entire open pit by minimum 20m, and potentially by as much as 40m, thereby considerably improving the overall open pit inventory. The Company cited that the results received to date indicate this objective could fairly be achieved.

The RC drilling produced a significant result from Weights of Evidence (WoE) target, the Tailings East prospect: 4m composite sample of 4m at 2.55g/t Au (from 52m in MSRC332).

In March this year, the Company also confirmed new Tailings South gold target near Sandstone gold processing plant, which was being tested or refined under the aircore drilling program concluded in January 2020.

The bonanza grade intercept declared at McClaren and intercepts from the other two prospects signify impressive initial outcomes for Middle Island from the Phase 1 RC drilling results. Additionally, the Company is well-financed to progress with the follow-up activities at McClaren and is likely to announce further assay results in the coming weeks.

Middle Island has also reported new Two Mile Hill deeps Mineral Resource at Sandstone, the details of which will be released in our next article.