Middle Island is undertaking Phase 2 RC program at Sandstone, entirely focussed on open pit targets, to infill and extend existing and recently defined deposits from 2020 Phase 1 drilling program. The Company’s key objective is to classify its gold Mineral Resources to an Indicated category.

According to Middle Island, the new intercept in MSRC544 may partly reflect gold in nugget form as it is derived from a very shallow depth of 3-7m while intercept in MSRC545 suggests otherwise with grades reporting over a 4m interval and the confirmatory down-dip from MSRC544. 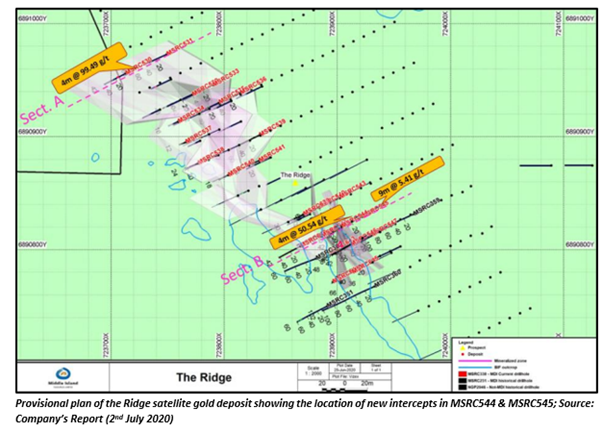 While Middle Island has completed the infill, extension and verification drilling at Ridge deposit prior to preparing a Mineral Resource estimate, some assays are still pending. So, it is not yet possible for the Company to ascertain the full significance of these initial high-quality intersections.

The Company expects to estimate Mineral Resources prior to consideration as Ore Reserves in a Pre-Feasibility Study (PFS) update scheduled for the September quarter 2020. The Company is progressing well with the Sandstone Feasibility Study update, in parallel to its ongoing Phase 2 drilling campaign.

The Phase 2 drilling campaign is continuing on schedule, with ~12,000m of drilling completed, while oxide diamond coring of Sandstone’s new satellite deposits is likely to begin next week.